Fat burners are ubiquitous with the supplement industry — much like protein powder or pre workouts. Due to their popularity, most companies have their own take on a fat burner or at the very least a product that claims to help with fat loss. 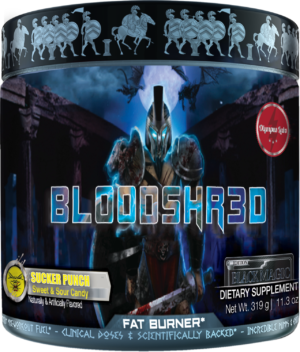 Get ready to sprinkle some Black Magic on your diet. Olympus Labs plays for keeps with this one

But when you want a serious take, you have to ask what Olympus Labs is doing. Unafraid to make powerful formulas for advanced users, Olympus Labs blew the doors down in 2016 with the original BloodShr3d fat burning powder, which is also getting updated. But in fall of 2018, they decided to take things further and enhance it to true DemiGod status. Meet BloodShr3d Black Magic.

Are we as impressed with it as we were with recently-launched Elim1nate and Superior Protein? Let’s find out!

The Premise: A fat burning powder with nearly everything we love?!

Honestly, the idea behind BloodShr3d Black Magic appears to be: “let’s throw every fat burning ingredient in that PricePlow enjoys and then find even more to keep them on their toes”.

BloodShr3d Black Magic has a massive label of ingredients that make up its formula. In order to fit all of the ingredients, they stuck with a powder formula. While some prefer the convenience of popping a capsule once or twice a day, we prefer powders for fat burners lately. Powders have more room for ingredients that require more volume (like amino acids) and allow dieters to tweak the dose according to their response — a necessity in the age of high-stimulant products.

300mg caffeine in two scoops… and two other strong stimulants

The new Black Magic version is no exception as it bolsters 300mg of caffeine per two-scoop serving, but that’s only the start of this stimulant game. If you like what we call “exotic stimulants” to get you going, then you’ve landed on the right page. And if the powder is tasty (which it is), then it adds something to look forward to on a day of hard dieting! 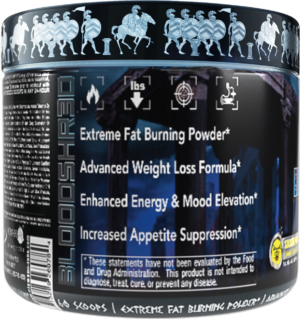 “Enhanced Energy & Mood Elevator” is putting it softly. This stuff is for those who need it amped up!

While there are some stiff stimulants in here, one important thing to note up front is that it’s a yohimbe-free formulation! That’s right, there’s no Y, Alpha-Y / rauwolscine, or the related Stimulant-X that’s in the Re1gn pre workout. If you like the aggressive formulas but can’t handle this class of ingredients and get discouraged when every single strong product has them, then keep reading – Black Magic was made for you.

For this analysis, we’re going to put every ingredient through our usual harsh scrutiny by diving into the available scientific literature. Olympus Labs’ Bloodshr3d Black Magic is designed to:

For a fat burner, these goals are realistic and this isn’t Olympus Labs’ first rodeo in the weight loss arena. They had two versions of BloodShr3d in the past, as well as the equally edgy Olympus Labs Ignit3 fat burner which serves as the DemiGod option for capsule-lovers.

Before we dig in, check out the prices below and sign up for Olympus Labs news alerts because we’re only a fraction of the way through all of their new product launches!

WOW. This stuff packs power, and this Sucker Punch flavor is insane if you like it sour! I’ll be sticking to Rainbows ‘n Stuff though:

Without further ado, let’s get to the ingredients! No outrageous claims needed, the ingredient label and all of its glory will do the talking today. Our long-term fans will know we love this approach to sales.

Note: The following ingredient doses are for a two-scoop serving. Due to the high-stimulant load, we strongly urge all users to start at one scoop to assess tolerance! 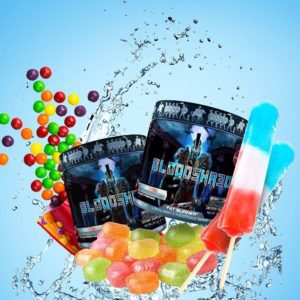 The initial three flavors… sucker punch is rumored to be sour!

Rumor has it that sucker punch is both very sour and sweet, so if you’re into the Warheads kind of candies, you may be in. Otherwise, it’s on to the sweeter flavors for you! Mike’s review will be posted above discussing which flavor he likes best.

So far, bombsicle is fantastic, which definitely reinforces our earlier point about flavored fat burners being a nice treat for dieters. We’re also suckers for candy flavors, so there’s that!

This is a seriously good product, if you can handle the potent stim-trifecta. BloodShr3d includes the fat burners we have really loved over the years, and some new thermogenics that we’re falling in love with too.

Olympus Labs is back on PricePlow, and this is the kind of supplement we missed from them!

The inclusion of KSM-66 Ashwagandha is brilliant, because it smoothes out the entire operation and has so far seemed to keep any crash at bay (or, something is, because I haven’t crashed from this at all).

We only have minor complaints with the formulation. The raspberry ketone inclusion could have been dropped for a superior ingredient — perhaps hordenine. If hordenine was included, the PEA vibe would have been greatly enhanced… but we’re not so sure you need that with J. Regia, an ingredient few companies are using. So if it comes down to hordenine or J. Regia, and you’re on the stimulant train, it’s J. Regia all the way.

Get ready to sweat!! Without a doubt, BloodShr3d is a top contender for king of powdered fat burners. The only question is where you’ll land between one and two scoops.