Not finding any quality maca supplements? Not a problem anymore!

After years of rejecting failed maca extracts, NutraBio has partnered with Nutrition21 to bring you an updated Maca supplement based upon Nutrition21’s trusted and tested, Peruvian-grown Lepidamax.

This post has been a long time coming! NutraBio is the industry leader in quality and transparency, and has been for quite some time. Today you’ll learn why.

Oh how we just love when things come full circle — especially when it brings consumers something superior. We’ve been waiting nearly two years to write this article and tie up this loose end, and the day has finally come:

The backstory: the maca market is straight garbage (2018)

Before getting into the product launch itself, let’s first go back in time to 2018, at the Mr. Olympia Convention. There, NutraBio Founder and CEO Mark Glazier was celebrating the launch of EAA Energy at a NutraBio “BioCrew” workout event in Las Vegas.

In a semi-profanity-laced interview, I got Mark fired up about not feeling his age. But he also went on a rant exclaiming how hard he was working to keep a quality maca extract in stock for NutraBio’s customers. Because none of the incoming maca ingredients from raw materials suppliers were passing the test. It’s at the 4:45 mark in the video linked below:

Here’s what he said:

We’re out of stock in Maca for the last two months because the stuff is coming in and not passing.

We just got in on Friday a COA [Certificate of Analysis] that didn’t match the spec sheet on everything as far as heavy metals and microbials – they were above the spec sheet. So we asked for confirmation from the manufacturer in China, they sent another COA, from that, but it didn’t match the COA that the vendor here gave me! So we had two COAs with the same lot number on both of them, and they don’t match each other!

That’s why we test every ingredient in-house and send it to third-party. We’ve had a lot of problems with herbs in the last couple of years, we dropped a lot of them, but now we’re starting to come back with some stuff.

I mean a lot of you guys are out there complaining about our Maca being out for two months… that’s why. I’m not going to give it to you if it’s bulls***. If I can’t trust what’s going into the bottle, you’re not getting it.

As always, we appreciate Mark’s transparency and candor. NutraBio did occasionally get some Maca out, but it’s been backordered more often than not because of the situation above.

Good news was on the horizon, however. In the spring of 2019, top-tier ingredient supplier Nutrition21 decided it was time to fix the problem for good. They launched a trusted and tested form of Maca, calling it Lepidamax.[1]

We blogged about it, but most brands didn’t seem to know why it was so important at the time. Mark Glazier did, though, and here’s why: 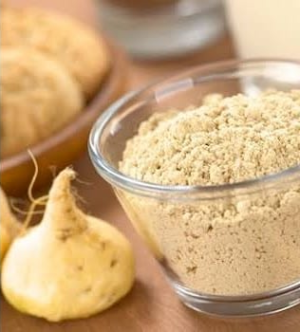 Maca Root has had some serious quality issues the past couple of decades. That all changes right now.

The video with Mark Glazier above highlights a major issue with the maca market: China’s involvement. While we understand that a majority of our supplement ingredients come from China, and even cooperatively work with some of these suppliers (they don’t all behave as shadily as in Mark’s story), herbal ingredients have a different story.

Honest supplier or not, the fact is, Maca doesn’t grow properly in China! Real maca root is from the Peruvian Andes Mountains, which has the perfect climate, soil, and altitude to make potent maca root, also known as Lepidium meyenii or Lepidium peruvianum. Interestingly, this unique plant loves unpleasant conditions – it thrives in the freezing, windy climate at a 13,000ft altitude.[2] That hasn’t stopped the farmers for cultivating it since the 1500s, because its effects are that incredible.

Peru keeps it under lock and key, and while there have even been accusations of theft and smuggling of their seeds out of the country,[3,4] it almost doesn’t matter — because it grows best in the mountains of Peru! 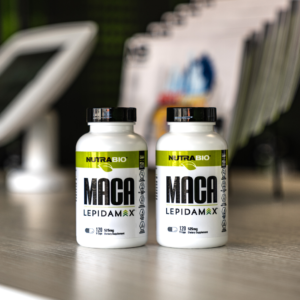 NutraBio Maca is back on the shelves, and powered by Nutrition21’s Lepidamax, it’s better than ever!

Finally, another year later, NutraBio has switched its maca source to Lepidamax after it passed the test and made the grade. Trusted. Tested. And from the Peruvian Andes – just the way it’s supposed to be.

When Nutrition21 launched it, they even published a study showing its effects on performance, and another one followed the year after using this specific ingredient. While I’m unsure of any personal performance gains, having run three bottles of the ingredient, I can assure you that it has other insane effects that are to be expected with Maca!

Below, we cover those studies and a bit more. But first, check out the prices on NutraBio’s new Lepidamax-powered Maca, and sign up for our NutraBio News alerts, because this brand is unstoppable these days:

Note: In the products listed above, look for the bottles with the “Lepidamax” logo on front and in the label, or get it directly from NutraBio with our PRICEPLOW coupon. 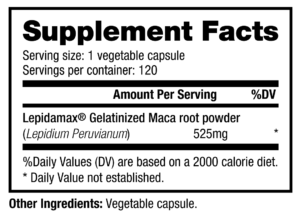 NutraBio Maca Ingredients feature Lepidamax from Nutrition21, and as always, no added fillers or excipients in the vegetable capsule!

The Supplement Facts Panel for NutraBio’s Maca simply lists 525mg of Lepidamax Gelatinized Maca root powder (Lepidium Peruvianum). As always with NutraBio, there are no fillers or excipients in their capsules, so that’s all you’re getting. There are 120 vegetable capsules per bottle.

As a trusted source of Peruvian Maca, we believe that most (if not all) research applying to Maca should apply to Lepidamax as well — so long as it’s dosed appropriately. But since we’re dealing with just Lepidamax here, we’ll first focus on its research, and then discuss a bit of the other maca research out there:

What are the benefits specific to Lepidamax Maca?

We’ve always known maca to be incredible, but the suppliers simply weren’t. Consider that problem solved: The Maca game has officially been changed by Nutrition 21’s Lepidamax

As a research-centric company, Nutrition21 has sanctioned one study specifically on Lepidamax, and provided the Lepidamax (yet didn’t fund) on another. Since they deal heavily in the sports nutrition industry (with ingredients like the Nitrosigine nitric oxide booster and the Velositol muscle protein synthesis amplifier), their studies involve performance. This is nice given that other general studies discussed lower down often involve fertility, libido, mood, and cognition.

Following the hints of a 2012 animal study that showed maca’s ability to increase endurance capacity,[5] Nutrition21 decided to take things in this direction with their initial foray into maca research:

We look forward to Nutrition21 publishing more research on Lepidamax. Until then, we can look at some of the earlier research on general maca extracts:

The following research was mostly performed on humans, but with other maca extracts. It should apply to NutraBio Maca, but note that it wasn’t on Lepidamax.

It will be interesting to see if any cognitive benefits are shown in human adults.

You really can “choose your own adventure” with this supplement. NutraBio’s label (shown at the bottom of this post) states “1 capsule daily or as needed”.

However, a lot of research is pointing at higher doses – Nutrition21’s research points closer to 2.1g/day, which would be four capsules per day. This would give you a 30 day supply in a bottle.

If taking this “more adventurous” dosage, it may be best to space them into two separate doses of two capsules each – morning and evening.

Other supplements to stack 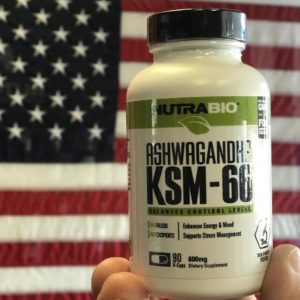 Your stack really depends on your goals.Here are some ideas:

And of course, if looking for a pre workout supplement, you can never go wrong with NutraBio Pre Workout or NutraBio Pre EXTREME if you enjoy the added carbs and yohimbine!

A product release that circles the wagons

As you can imagine, we’ve been waiting for this product release for nearly two years! With as much trouble as Mark Glazier has had finding quality sources of maca, you really have to question the other stuff that’s out there on the market, such as many of the no-name brands on Amazon. How many of those brands out there actually test their incoming raw materials? We almost don’t want to know.

Stick with the good stuff… especially when it comes to herbs

But just because we trust Nutrition21’s Lepidamax doesn’t mean Mark and team are taking their word for it — NutraBio will still be publishing 3rd-party lab tests, just like they do with every other supplement they produce. This is what it means to make supplements Without Compromise.

So, if you’ve been interested in maca but never knew where to turn, your search is over. Until further notice, NutraBio Maca, powered by Nutrition21’s Lepidamax, is the only option we can believe in.

Note: In the products listed above, look for the bottles with the “Lepidamax” logo on front and in the label, or get it directly from NutraBio with our PRICEPLOW coupon.

The official NutraBio Maca Label. We personally dose higher than 1 capsule per day, though!