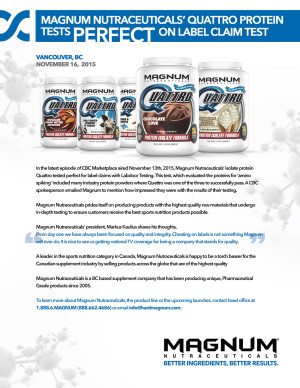 Magnum brings home another winner. Click the image to read their press release

We’ve talked numerous times here about the issue of amino acid spiking, and how it’s been rampant in the protein powder market the past few years, peaking in late 2014.

We’re happy to report today that a new protein powder has been found to be 100% accurate to its labeling by the testers at CBC Marketplace — Magnum Quattro,[1] which you’ve seen featured here in several of our protein powder recipes!

If you don’t live in Canada, you might not be familiar with CBC Marketplace. It’s a television show that can roughly be equated to Consumer Reports here in the United States. They do all sorts of consumer watchdog reporting by independently purchasing and using products, and recently they decided to take on the issue of amino acid spiking by testing a number of protein powders. Quattro was one of only three in the test to actually meet the content of its label claims.

Before we get into the details, compare prices and sign up for deal alerts on Quattro: 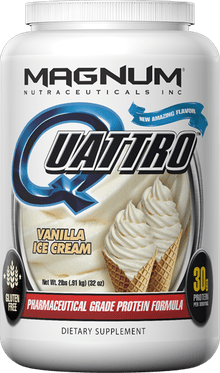 Head over to PricePlow to get deal alerts on Magnum Quattro!

CBC Marketplace employed our friends at Labdoor for their testing, who regular readers will likely recognize as the current leading independent supplement testing site (and virtually the only one doing off-the-shelf tests on a large scale).

We reached out to a Magnum representative about getting hold of the actual amino acid results, but they say they were simply told by CBC that Quattro had tested perfect to its label and received no further data. Magnum is looking into obtaining further information from Labdoor.

In the interim, we’re willing to take these results at face value. We know Labdoor from experience to have reputable protein tests, and CBC initiated this whole investigation on their own with no contact with or input from Magnum. Labdoor exclusively uses FDA-registered analytical laboratories for their testing, does not endorse any products and does not have a partnership with any supplement manufacturers.

To supplement the information, Magnum is allowing us to publish an overview of some of their internal testing methodologies below:

This type of testing doesn’t discredit amino acid spiking – which is why the CBC / Labdoor cooperative is better – but it provides a bit of evidence that Quattro is tested for fungus and dangerous bacteria.

If you’re curious about who else passed/failed the CBC test … well, they really want you to watch the show, as the CBC article[1] doesn’t mention company names or get into details about the parameters of the test.

By paging through other articles, however, it turns out that five products in total were tested. We know that GNC Mass IV ProPerformance joined Quattro in living up to its label, but apparently GNC’s Lean Shake 25 fell well short with only about half the promised protein content!

Click the image to compare prices on all HardMagnum products at PricePlow!

Quattro is a protein powder we’ve been talking about a lot – it’s used in several of our protein powder recipes, and Magnum Nutraceuticals has been continually innovating their products and flavors – the best of which is their hit pre workout supplement, LIMITLESS.

The amino acid spiking scandal has begun to quiet down as lawsuits have been operating in the background, but if you’re still not sure what to take, you can definitely add Quattro to your list of highly-trusted powders.