Anyone familiar with Doug Miller knows that he’s a true patriot. It’s no surprise, then, that we see a burst of creative energy from him around the 4th of July every year. Last year, we saw CORE Nutritionals release a Patriot Pop flavor of Core ABC. But wait, there’s more from Crush It Holdings: 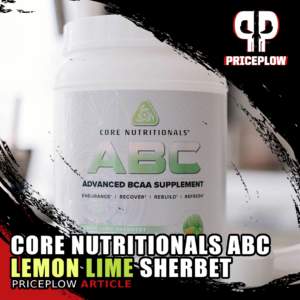 A perfect summer BCAA flavor, but we think it can become a wintertime “daily driver” too — it’s Core ABC Lemon Lime Sherbet!

What better way to recover from your heart-pounding workout in the sweltering heat than an iced glass of BCAAs with intense citrus flavor?

The Core ABC flavors are always incredible, and we’re sure this one is no exception.

Let’s get into the details of this flavor and how Core ABC works. But first, check out the latest deals on PricePlow and sign up to get email alerts about Core Nutritionals’ phenomenal products:

We love this flavor because it isn’t too thick – the consistency of the product when mixed with water remains light and airy, just like a fine sherbet would really taste.

Definitely more lime than lemon in this flavor, which is exactly how we think it should be: the more delicate notes up front, with the delicious tangy bite of the lemon in the background. 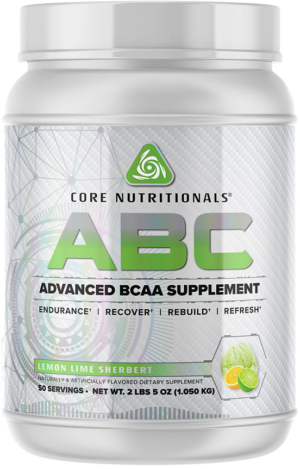 Because of its endurance-boosting properties, Core ABC is an awesome supplement to use on cardio day in particular.

Long story short, the branched chain amino acids (so named because of their tree-like chemical structure) leucine, isoleucine, and valine are possessed of anti-catabolic and endurance-boosting properties. The most common way to use BCAAs is as an additive pre workout supplement that prevents your muscles from being excessively damaged by an intense workout.

Of course, some people mix up some BCAA powder and drink it during their workout, which has pretty much the same effect: which route you choose really comes down to personal preference.

Just understand that BCAAs alone are not enough to build new muscle: for that you do need a greater quantity of protein from food or supplements.

For a full ingredient analysis of Core ABC from Core Nutritionals, read our review of last year’s Core ABC flavor, Patriot Pop, at Core ABC Patriot Pop: Boost Your Workout with a Bomb. 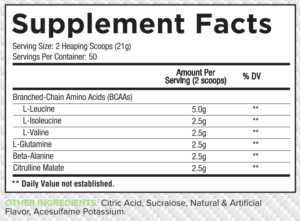 If you don’t feel like reading all that, here’s a brief review of what these ingredients are and how they work:

Check out the many other Core ABC flavors: 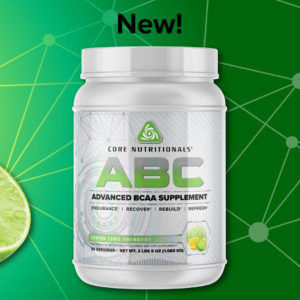 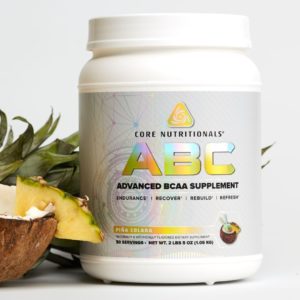 Stave off catabolism with Core ABC

Lemon Lime Sherbet for the ABCs

Core Nutritionals does a great job with their flavoring, and they also do a great job with seasonality. This is exactly the kind of flavor system you want to see in the summer, and that’s when Miller and team delivered. This is especially true in the scorching hot, heat wave summer of 2022.

Of course, no offense to you lemon-lime drinkers in the winter, but it’s just not the same then. Now’s the time to test out the flavor system with some extra ice, and once you do, you’ll probably agree that this could easily serve as a daily driver to keep the aminos flowing, even in the winter.