Our friends at CORE Nutritionals have begun their annual 12 Days of Crushmas Holiday promotion, and they’ve kicked it off with a bang on founder/CEO Doug Miller’s YouTube channel: 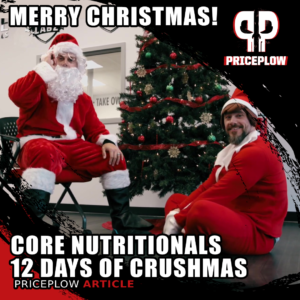 The above video is probably NSFW (unless you work at a cool company like CORE), and puts a Crushmas spin on the legendary Christmas movie, Die Hard. The villian is played by Patrick Mabe, who we recently featured on the PricePlow Podcast in Episode #073.

Crushmas isn’t just about epic movies, though — it’s really about 12 days of fantastic deals (sorry, you can’t stack PRICEPLOW code with them)!

More coming — Stay up to date with CORE at PricePlow

As always, you can sign up for our CORE Nutritionals News on PricePlow or in the area below. Up next, we have details on the new Vitamin Shoppe exclusive Core FURY v2 pre-workout (now out at Vitamin Shoppe) and the new Core PEAK strength and pump supplement pills (coming soon)!