Dr. Cameron Sepah of Maximus is back with yet another must-listen episode on the PricePlow Podcast! 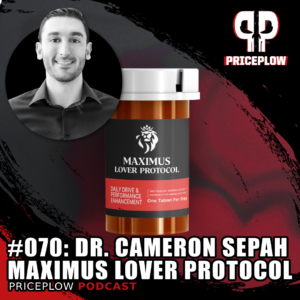 Dr. Cameron Sepah is back on the PricePlow Podcast to introduce The Maximus Lover Protocol

In Episode #062, we introduced Dr. Cam and spoke with him about the Maximus King Protocol, a better and safer way to boost testosterone with clinically significant results. This time, we talk about libido, sexual health, and optimizing male performance and mindset.

Maximus is a consumer telemedicine company for male health and hormone optimization. It comes with a highly-active community known as the Maximus Tribe, featuring men who are working to better themselves in all aspects of life.

The detailed show notes (with references) below, and you can watch it on YouTube or listen to it on your favorite podcast app:

What a great conversation. One again, listen to Episode #062 with Dr. Cam, read our article on the enclomiphene in his King Protocol, and sign up for our news alerts for Maximus Tribe below so that you can get updated when we publish our deep dive on PT-141 / Bremelanotide as well as future podcasts him!