The past year has seen a tremendous number of immune system supplements enter the market. We’ve covered several of them, including Myprotein’s Immune Blend that launched in January of 2021. This was a unique supplement because it didn’t have the standard zinc-based formula that had become so popular. Instead, Immune Blend contained a stackable ingredient known as Wellmune, which is a natural yeast-derived beta glucan with a rich amount of research behind it. 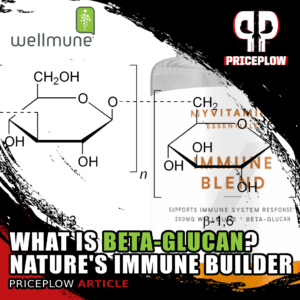 What are Beta-Glucans? Prepare to meet one of mother nature’s most interesting immune system support compounds

We briefly covered beta glucan in the article linked above, but there is far more to it than what’s cited above. With consistently successful clinical research demonstrated in children, athletes, seniors, and stressed individuals, beta glucan supplementation shows a great deal of promise, yet is not frequently discussed in the scientific community.

This article breaks that research down after giving a primer on the two major components of the human body’s immune system.

Before we get into the details, check out PricePlow’s deal listings on Myprotein’s Immune Blend and sign up for alerts on Beta-Glucan supplements so that you don’t miss any news or updates:

If you want to skip right to the research, head over to our beta-glucan information and research section. First, we cover the immune system itself:

A primer on your immune system

The story is much more complex, but the general idea is that the innate immune system is a physical first line of defense, while the adaptive immune system brings a type of responsive “intelligence” to specifically target pathogens.

Evolutionarily speaking, the innate immune system is the older of the two systems, dominating immunity in plants, fungi, and insects.[3] In metabolically healthy humans, both work well together to provide us with a “best of both worlds” immunity strategy.

However, we can make them work even stronger by providing additional tools.

Beta-glucans (β‐Glucans) are naturally-occurring fibers found in a variety of historical foods like shiitake mushrooms, baker’s yeast, barley, oats, and rye. They function as energy stores and structural components in the cell walls of plants, algae, fungi, and bacteria.[4] 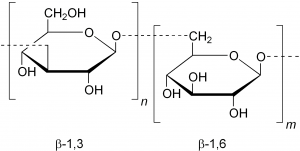 There are several types of beta-glucans, but for immunity, we’re interested in beta-1,3/1,6-glucan

Different types of beta-glucans have different biological functions. For instance, while oat-based β‐glucans are quality dietary fibers that have been shown to improve lipid levels and insulin sensitivity,[5] yeast‐based β‐glucans function as immunomodulators, specifically assisting the innate immune system discussed above.[6]

This means that the source and type of processing matters, because different types of processing and purification methods lead to different chemical structures and effects.[7-9] For the scope of this article, we’re here to discuss immunity, and the types of β‐glucans that have shown an immunomodulatory action are those with high molecular weights and a high degree of branching — such as those from fungi and yeast.[10-14] 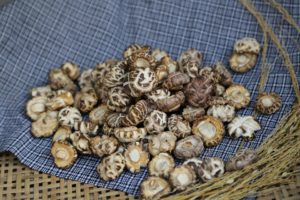 Shiitake mushrooms are of the collective “medicinal mushroom” family who have long been used in ancient medicine for their healing properties. They contain beta-glucan.

In the lens of supplementation, this is important since most Western dieters do not eat diets high in fungi that may provide immune-supporting beta-glucans. Many eat oats, but those don’t provide the backbone we’re looking for in terms of immunity. This is where dietary supplements help.

In the 1940s, Pillemer and Ecker worked on Fleischmann’s Yeast (S. cerevisiae) and first connected the dots between β‐glucans and improved immunity.[15,16] Several decades of research followed, and we are now to the point where we have serious clinical trials in humans regarding the efficacy of these yeast- and mushroom-based fibrous compounds.

As mentioned above, different plants/fungi generate different types of beta-glucans. The chemistry gets hairy, but the general idea to know the sources:[17]

Where the Beta-Glucans comes from makes a very big deal. 1,3/1,6 is where we get immune benefits.[17]

It’s the latter of these three that provide the immunomodulatory properties, and they come from fungi and yeast.[10-14]

With that background covered, it’s now time to dive into the immunity research behind 1,3/1-6-glucan specifically.

Before diving into specific research studies, it’s best to first point out an up-to-date review that covered all known research on β‐1,3/1,6‐glucan supplements.[17] There are published studies on five different proprietary supplements in this category: 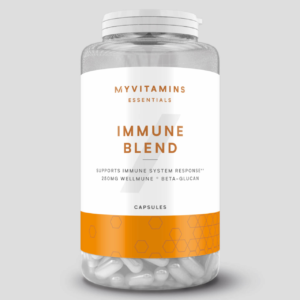 Of these, Wellmune is the most heavily-researched of the list, and is the ingredient used in Myprotein’s Immune Blend.

The review is broken down into the following types of studies on the effects of β‐glucans:[17]

The review concluded the following:

The most studied supplement is Wellmune, which has been evaluated across the widest population range to reveal significant alleviation of URTI, allergic episodes, and exercise‐ and age‐related immuno‐suppression.[17]

If reading only one paper cited here, this would be the one to look at, as the four tables are extremely helpful.

Taking a look at several of the studies cited, we can get into demographic specifics:

Side effects: Are there any adverse events to supplementing 1,3/1,6-glucans?

The major review discussed above claimed that “no adverse events were detected, and no major safety concerns were presented in response to any of the selected intervention studies.”[17]

At this time, we have no concerns taking a trusted ingredient like Wellmune as directed, so long as there are no known allergies, but seek a doctor’s recommendation before beginning any new dietary supplement. 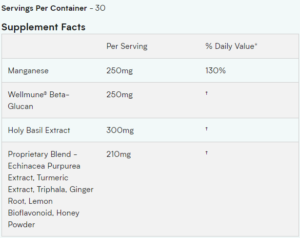 Myprotein Immune Blend provides 250mg Wellmune per day, just like much of the research cited above

Children obviously need less, and doses range from 25-75 milligrams per day, depending on size. Always follow the labels, the successful research you are attempting to follow, and a doctor’s instructions.

Conclusion: Fungi and Yeast do it again

This isn’t the first time we’ve seen mushroom- and yeast-based ingredients yield benefits when taken as supplements, and it won’t be the last. Our society has drifted from eating fungi, and that’s a shame, since they provide several benefits when eaten responsibly. Mushrooms have been around longer than animals, and there is evide nce that the mycelium helped us evolve. It’s important that we remember our roots, and remember that we would not be here without them.

While metabolic health is of paramount importance, there’s a very strong possibility that additional immunity can be gained from ingredients like 1,3/1,6 beta-glucan derived from yeast and fungi.

While most supplement brands were formulating more “traditional” immune system supplements, Myprotein did a great job in adding a stackable profile containing Wellmune in the Myprotein Immune Blend. This is a supplement that can be added to nearly any good multivitamin (which should contain a quality form of zinc), and the price is right as well.