Ryan says it better than any article ever could:

I was barely out of high school when I started a business in my garage. I had never met another CEO. Never talked with an entrepreneur. Never knew anybody in the fitness industry. I didn’t care. My passion was fitness and business and all I wanted to do, night and day, was work on creating the kind of company that I would want as a customer. I didn’t party during the college years. I didn’t really do anything for fun. I worked… and I loved (nearly) every single minute of it. 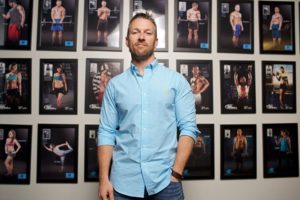 “There have been an insane number of ups and downs, as any entrepreneur can understand, but the highest ‘up’ has been working with my team to create something special that will live on.”[2]

Yesterday, October 4th, was his last day at Bodybuilding.com, but he’ll maintain an advisory role to the company indefinitely.

The articles and Facebook feeds point out the many highs and lows. Among the highs are the explosive growth and legitimacy that DeLuca brought to the industry, as well as the success he brought to Boise, Idaho.

They made nearly half a billion dollars in revenue last year,[5] and are expected to top that number this year.[1]

With the highs come the lows

Several of the “lows” came in the year 2012, in which Bodybuilding.com, Ryan DeLuca, and his brother Jeremy DeLuca were all fined by the US Justice Department after pleading guilty for selling misbranded steroids from their warehouse between 2006 and 2009.[6]

To top it off, 2012 was the year Driven Sports Craze was named the Bodybuilding.com Supplement of the Year award. Craze was later found to contain a methamphetamine analogue,[7,8,9,10] and despite Bodybuilding.com (and DeLuca’s) initially fervent backing of the supplement throughout the scandal, they eventually removed it from stock and reversed course.

Point being, Ryan will be the first to tell you that when riding the entrepreneurial rollercoaster, the lows are low, but the highs make it all so worthwhile.

What’s next for Bodybuilding.com?

Chances are, nothing much will change in the short- and medium-term.

However, it’s been tough to miss the “corporatization” of Bodybuilding.com over the past five or so years. We discuss much of this in our previous post, Five Ways to Fix the Bodybuilding.com Supplement Awards, where one point is that not everything needs to be a short term cash play, amongst other things. We hope the trend has leveled off, and things will more or less continue.

We’re not sure who will take the helm – likely someone appointed by Liberty Interactive – but it’s our hope that they don’t try to put too big of a “personal stamp” on the business, or make a financial name for themselves at the consumer’s expense.

Thankfully, Bodybuilding has been all over our hot supplement deals page, with tons of Buy 1 Get 1 Free offerings, and we hope that continues. The company clearly has a volume pricing advantages, and we love when they pass the savings on to customers.

Since 2012, things have been markedly clean, although we’re desperately hoping that they don’t hit a new low by marketing potentially carcinogenic supplements with nicotine-like compound, arecoline in them to their massive userbase this year.

Bodybuilding.com has an effective and experienced legal compliance team, and we’re confident they’ll continue to do the right thing and promote generally safe products, as they have the past few years.

What’s next for Ryan?

I have a lot of ideas for new businesses and other passions that I plan to pursue after a long vacation, my first real vacation since I started the company.

A long vacation is well-deserved, no doubt. But entrepreneurs out there won’t be surprised to hear that Ryan has “a lot of ideas for new businesses and other passions” that he plans to pursue after his first real vacation in literally decades.

There’s a saying by billionaire entrepreneur and investor Peter Thiel: “We wanted flying cars, instead we got 140 characters.”[11] — We hope DeLuca recognizes these issues and does something useful with his money, as opposed to nearly every other startup out there these days.

In a way, we’re surprised DeLuca stayed as long as he did – after selling much of the company in 2008, there likely couldn’t have been as much incentive to stay after a couple years of selling. But he hung in there and kept making the business grow, likely increasing his earnings and net worth to considerable levels.

Note that nobody at PricePlow has met Ryan or ever talked to him, except for a couple of private messages in the forum.

So congratulations to you, Ryan, we hope you do some incredible things in the future!