Rich Piana’s Egg White Crystals are BACK at 5% Nutrition 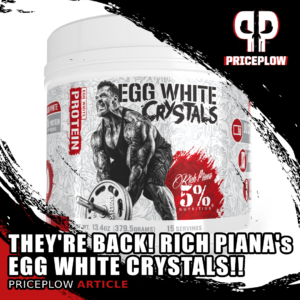 They’re back, and they’re better than ever! Rich Piana’s 5% Nutrition Egg White Crystals have returned!

If you’ve been following Rich Piana and his supplement brand 5% Nutrition for any length of time, you know the both Rich and 5% are incredibly passionate about consuming whole foods each and every day. You’ve also probably picked up on the fact that old Rich isn’t exactly the biggest proponent of protein powders.

And if you’ve been following the PricePlow Blog lately, you’ll know that 5% Nutrition has recently been updating all of its tubs to a newer white “Legendary” look (see our recent 5% Nutrition articles).

Into early 2022, one thing had been missing, however: Rich Piana’s Egg White Crystals! The brand’s famous first “protein powder” had been discontinued, but 5 Percenters across the world repeatedly asked for them back. 5% answered, and they’re now available in the legendary white tubs!

We’ve got all the info down below, but first, take a moment to check the best deal and sign up for PricePlow alerts:

When the product first launched, we recorded one of our most watched YouTube videos ever. Behond:

Back to Rich Piana and his quest for whole foods. In the mid 2010s, the fight for whole foods put some Rich Piana followers in a bit of a quandary… you need to eat enough protein, but there’s just not enough time in the day to always eat a whole food meal, and dairy-based protein powder can have GI side effects in some.

Rich and co. solved this dilemma with the release of Real Food Egg White Crystals – Rich Piana’s alternative to a Protein “Powder”. 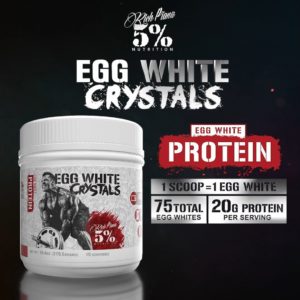 We’ve written about his carb supplements – Rich Piana’s REAL CARBS and REAL CARBS Rice, so what can he do on the protein front?

Egg Whites was his first answer — and later on, we were also treated to the dairy-free Shake Time powder as well.

So with that backstory updated, let’s dig into these epic egg white crystals.

Each serving of Real Food Egg White Crystals consists of 5 scoops of egg white crystals that totals 25.3g and contains: 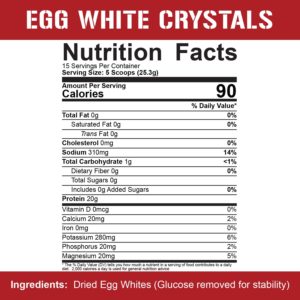 You read that right, each tub of Real Food Egg White Crystals are made of REAL, actual eggs whites. The only thing missing is the water which has been “gently evaporated” from the egg whites as part of the manufacturing process.

When you’re ready to mix up your egg whites to cook up a delicious scramble or for a quick protein shake, simply add water and the crystals turn into light and fluffy eggs in a pan on the stove or in a bowl in the microwave! Even more simple: one scoop equals one egg white, and one 15 serving tub is equivalent to 75 eggs… only no refrigeration is needed.

Eggs are often termed “nature’s perfect protein” due to its high bioavailability and utilization by the body.

Therefore, the egg white crystals should not be denatured or potentially damaged by ultra-high heat like whey and casein proteins typically are.

The benefits of egg whites 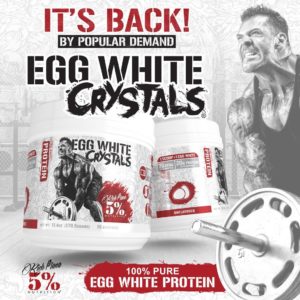 Egg whites are great sources of protein – they have an amino acid score of 100 and a very high rate of net protein utilization (NPU).[1] Based on the weight gain of test subjects, they have an incredible Protein Efficiency Ratio (PER) when compared to other popular protein sources.[2]

They’re often used as a great source of high biological value protein that has a low phosphorous-to-protein ratio and low cholesterol content,[3-5] which is important to certain dieters.

For many of our readers here, however, they’re simply a source of high-nutrition, animal-based protein that’s dairy-free. Those who are lactose-intolerant sometimes look at plant-based protein powders, but egg whites are often better alternatives in terms of biological value, absorption, and low environmental toxins.

5% Egg White Crystals offer the above dairy-free benefits, with the ultimate convenience – you can mix them with water and cook them, drink it straight, or even use them to fortify other drinks and smoothies. Every scoop gives you an extra 4 grams of protein!

In 2016, we had a chance to try out the new egg white crystal powder from Rich and 5%. Long story short, they perform incredibly well, so much so, that, in Mike’s opinion, they actually taste better than the pasteurized egg whites you get in a carton at the store! Check out the review above and see for yourself.

Real Food Egg White Crystals originally came in two flavors: regular egg white “flavor” as well as a chocolate flavor for those that just wanted a quick hit of protein without having to cook a pan of egg whites. 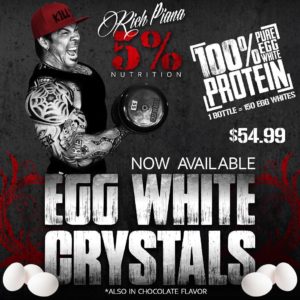 As of right now, they new 2022 release is just available in Unflavored, but if more flavors come out, they’ll be updated below:

Side note, if chocolate were to make a comeback, we don’t really recommend cooking them… unless you like chocolate tasting eggs.

Rich and co. outdid themselves with this one, and it’s back by popular demand. For nearly a decade, they’ve consistently brought unique products to the industry, and it’s made following them worthwhile and entertaining.

Real Food Egg White Crystals are incredibly versatile, as they can be enjoyed in a shake or as cooked eggs. Plus, they don’t require refrigeration which makes them an excellent option to take along when traveling around the country.

The only prohibitive thing to consider is the cost, but realize that there are 75 egg whites inside, and if you want the best the industry has to offer in terms of egg whites, you can’t do much better than 5% Nutrition’s Real Food Egg White Crystals.

Note: This article was originally published on December 30, 2016 and was updated on March 28, 2022 with the return of the legendary product.