Posted on October 6, 2022 by Mike Roberto and Nick Andrews | No Comments

Revive MD is one of our go-to brands for health and wellness. They have quite a comprehensive product catalog: For any given health concern, they often don’t just have one product, but a whole line of them. 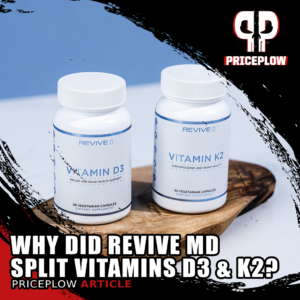 Revive MD has split up their Vitamin D3 and K2 supplements – in this article we discuss why!

Revive MD has sold a vitamin D3 and vitamin K2 combination supplement for a while now, but have recently separated the two ingredients into separate offerings. Today we’ll be discussing their standalone vitamin K2 product and why it can be advantageous to dose it separately from vitamin D3.

Don’t worry though, the price of the new vitamin D3 and vitamin K2 bundle is the same as the first-generation combo product – this isn’t a ploy to make more money, but instead a response to Revive MD’s loyal customers who wanted to double their Vitamin D dose, but didn’t want to double the Vitamin K dose.

Beyond just bringing this industry news, today we’ll get into what makes D and K such an effective combination in the first place. But first, let’s check PricePlow deals:

The importance of vitamin D

Vitamin D has rightfully gotten a lot of attention in recent years as a health-and-wellness supplement.

The last decade has seen a spate of new research showing that one’s vitamin D blood level affects the expression of over 200 different human genes,[1] making it a major factor in disease risk.

Vitamin D deficiency has been found to contribute to the onset of several major diseases and disorders, including bone loss, depression, type 2 diabetes, heart disease, and multiple sclerosis.[2] Needless to say, vitamin D is definitely one nutrient you don’t want to be deficient in. Unfortunately, vitamin D deficiency is common – an estimated 41.6% of American adults have inadequate levels of vitamin D in their blood.[3]

The situation might be even worse than that, too, because there’s currently intense controversy among researchers regarding how much vitamin D we really need. The statistic we quoted above is based on a cutoff of 15 nanograms per deciliter (ng/dL), but many researchers have argued that the target should be significantly higher.

According to Neil Binkley, MD, a renowned osteoporosis researcher at the University of Washington, the ideal blood level is probably around 40 ng/dL.[4]

Not good news when almost half of us are clocking in below 15 ng/dL.

Why do we need D supplements? 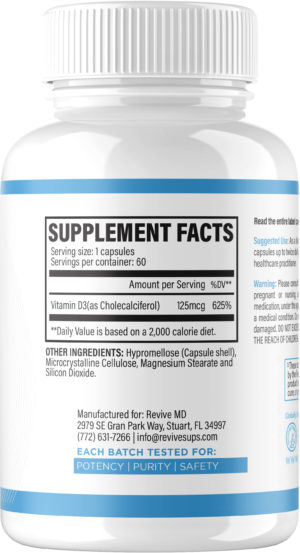 Of course, not everybody is deficient in vitamin D, but most people aren’t practicing a lifestyle that supports natural vitamin D production. You’ve probably heard that our bodies are responsible for making most of the vitamin D we need through direct sun exposure,[5] but few of us spend much time in the sun these days due to modern society’s affinity for indoor activities… not to mention the incessant push for chemical sunblocks. There are also problems with getting enough direct sunlight. For example, people who burn easily often struggle to get sun exposure in a safe and healthy way.

Dentist, Weston A. Price, famously conducted a world-wide comparative anthropology study in the early 20th century and found that contemporary hunter-gatherer societies were eating far more foods rich in vitamins A and D than industrial societies.[6] For instance, traditional European cultures used cod liver oil as a crucial source of vitamin D during the cold, dark winter months,[7] but unfortunately, this food has fallen out of fashion in European and American society.

Fortunately for those of us who don’t get enough vitamin D from diet or the sun, supplementation has been shown to raise serum vitamin D levels at least as effectively as food and sunlight.[8]

Vitamin D and the calcification paradox

The obvious solution is to just supplement with a ton of vitamin D and bring your blood levels up to the optimal target, right? Unfortunately, it’s not that simple.

The main concern with taking vitamin D is that because it can increase your body’s absorption of calcium,[9] taking too much supplemental vitamin D might cause your blood calcium levels to rise dangerously high.

In fact, the harm associated with vitamin D overdosing is largely driven by calcium levels rising too high.[10]

This leads us to recognize something of a paradox: Although having too little vitamin D can drive atherosclerosis in the form of soft tissue calcification,[11] so can having too much vitamin D.[12]

It also brings us to the main importance of vitamin K. 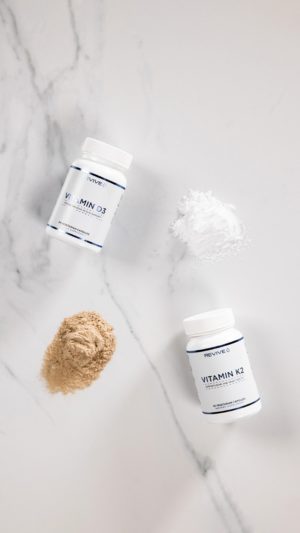 Vitamin K, as it turns out, is what regulates your body’s use of calcium. Your body needs vitamin K to direct free calcium to places where it’s actually needed.[13] Specifically, that means depositing calcium in your bones, which is where it belongs, instead of your arteries, veins, and other soft tissues.

In other words, vitamin K helps your body properly use and dispose of calcium.[13] This allows you to increase your vitamin D3 levels without fearing the negative effects resulting from a rise in blood calcium levels.

Vitamin K does this by activating matrix GLA protein and osteocalcin, two proteins that are responsible for building and repairing your bones.[14] Vitamin K is good enough at increasing bone growth that it can significantly slow the progression of age-related bone loss,[15] even in the absence of calcium supplementation.

Several studies have shown that due to vitamin K’s effect on calcium metabolism, taking it in conjunction with vitamin D can provide greater cardiovascular benefits than taking either vitamin in isolation.[17]

So, just to recap, this synergy occurs because in the absence of vitamin K, vitamin D can raise blood calcium levels to the point where arteries stiffen from calcification.

But even if you’re only taking vitamin K, the statistical likelihood is that your vitamin D levels are not high enough for optimal cardiovascular health.

We really need to take these together.

So then the question is, why not always take vitamin D3 and vitamin K2 together? 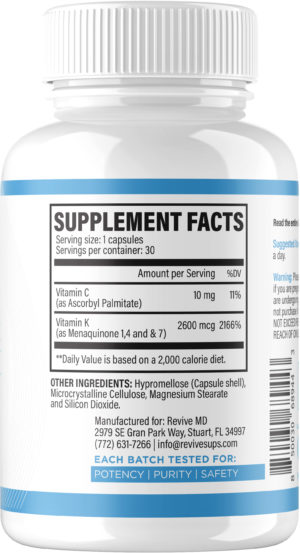 The answer is in the ratios: most of us need way more vitamin D than vitamin K. Taking large enough doses of vitamin D in a fixed ratio with K means you’ll end up getting much more K than you need.

Conversely, perhaps your vitamin D levels are fine (maybe you get tons of sun), but you aren’t getting any vitamin K from your diet.

The point of Revive MD separating their vitamin D and K supplements is to give customers more flexibility and individuation in how they dose the two. For advanced athletes (like those who are part of the Revive MD and Raw Nutrition communities), having more options is better.

Now let’s get a bit more into some Vitamin K specifics:

We won’t go too deep into the differences between all these variants of vitamin K, but they all come with slightly different benefits. For example, while vitamin K1 is better at supporting healthy blood clotting,[18,19] vitamin K2 is better at improving calcium metabolism.[20]

Revive MD’s previous Vitamin D3 & K2 supplement had just MK-7, the new one should be considered an upgrade.

All you really need to know is that a more broad spectrum of Vitamin K2 is represented here. So in taking Revive MD’s vitamin K supplement, you aren’t missing out on any benefits associated with a specific common form of K2. 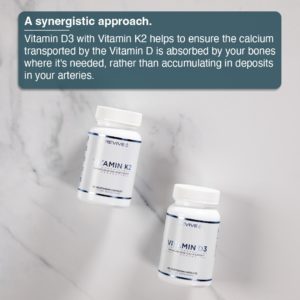 So the big takeaways here are:

We love seeing little tweaks to product lineups like this. Although it may seem like a small thing, it indicates that a company is listening to customer feedback and invested in improving the customer experience.