Posted on September 5, 2017 by Mike Roberto | No Comments

Although NutraBio has been around for over 20 years, the brand is still growing, and is well on its way to becoming a household brand. Their next major market gains are here as NutraBio continues to trailblaze throughout 2017.

The brand known as a leader in quality and transparency has had quite the year, and it can be difficult keeping up with everything they do. So we’ve got a Q3 de-briefing of sorts in store for you today to help keep you abreast of all the recent happens with NutraBio.

Product-wise, not only do they have new products such as their Naturals Series BCAA powder and the NutraBio Grass-Fed Whey Isolate, they have yet another new store presence as well!

We’ve got all the details ahead, but first, take a moment to check the best deal and sign up for our NutraBio alerts so you’re the first to know when something new is up with NutraBio: 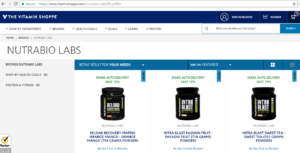 Tired of ordering online? NutraBio can now be found in your local Vitamin Shoppe! A national launch is underway!

There’s no better way to bring your products to the mainstream supplement consumer than getting your products into one of the largest brick and mortar retailers in the industry. NutraBio recently finalized an agreement with Vitamin Shoppe to be sold in all of their various stores (as well as online).

Coupled with the fact that NutraBio was already in GNC and sold online through Bodybuilding.com (more on them below!), adding Vitamin Shoppe to the mix further expands NutraBio’s reach to the average consumer and will serve to increase the brand’s name recognition alongside other popular brands.

When it comes to the major mainstream brands, NutraBio is our go-to — and now you can find them basically everywhere. 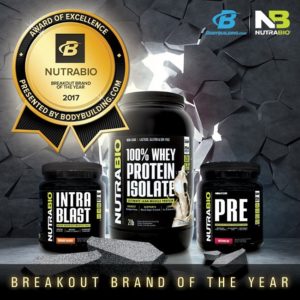 NutraBio was crowned the 2017 Breakout Brand of the Year by Bodybuilding.com.

Back in August, we wrote about how NutraBio was in the running to be named the Breakout Brand of the Year 2017 over at Bodybuilding.com.

Well, NutraBio’s hot streak keeps on rolling, as it was crowned Breakout Brand of the Year, taking down the likes of Onnit, PEScience, and Force Factor. Truth be told, this wasn’t even fair competition — Onnit is overpriced, PEScience has mostly great stuff but has already “broken out”, and Force Factor shouldn’t even be mentioned in the same breath as NutraBio. Talk about a runaway victory!

Next year, NutraBio has their sites on dominating other annual award categories at BB.com including pre workout of the year, protein powder of the year, and most importantly (and deservedly) brand of the year.

Lastly, there have been a few minor tweaks to three of NutraBio’s most popular supplements, which consists of:

More than a “Breakout” Brand

NutraBio isn’t a brand to sit back and take it easy, even after a successful year getting into Bodybuilding and GNC. They’re constantly releasing new formulas, revising older ones, and debuting new flavors to stay at the forefront of the industry.

2017 has been a banner year for one of the best brands on the market, we’re just wondering what the brand has in store for us next?!

You can read The NutraBio Story to learn more about the brand.