We love it when a supplement manufacturer finds a way to improve a mainstay ingredient – something that’s been around forever, and has such well-established bona fides, that the industry takes it for granted and stops looking for ways to make it better. That’s the perfect time to innovate. 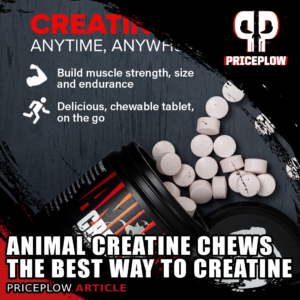 Universal Nutrition’s Animal Creatine Chews bring a fun and simple way to get creatine in – and they’ve got us hooked!

Universal Nutrition has done just that with their incredible new Animal Creatine Chews – a combination of creatine monohydrate, the most beloved ergogenic aid of supplement-taking athletes and bodybuilders the world over, paired with absorption-enhancing AstraGin and just enough carbohydrates to make it taste great and increase the uptake of creatine by your body.

These two seemingly simple innovations – putting creatine in chew form and combining it with synergistic ingredients – have had an enormous effect on the usability (and enjoyment) of creatine as a product.

Animal Creatine Chews have quickly become a PricePlow staff favorite. Put simply – we’re hooked on both flavors. We can’t get enough of them, especially because it’s one less powder supplement to measure and mix every day. And it serves as a nice little sweet snack to chew on. When you’re on a deep supplement stack, measuring all those powders can get tiresome – so yeah, we love the chews.

In this article, we recap the science behind creatine, and why it’s great to stack with AstraGin and some carbs. Long story short – they’re incredible-tasting chewable tablets – and aside from eating tons of ribeye, they’re what we consider to be the best and easiest way to get creatine in… ever. Before getting into the details, let’s check PricePlow’s coupon-powered prices and availability:

It’s no surprise to us that Universal Nutrition would be the company to do this, because they’re very much of the bodybuilding old school, around during the “golden age” with decades of solid- no-nonsense product launches behind them. Let’s get into the background:

So, in a single serving of 4 chewables, you get: 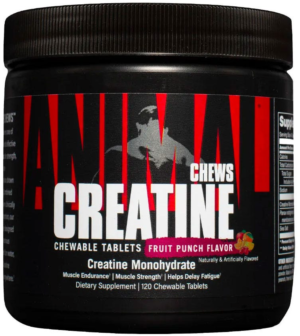 Animal Creatine Chews aren’t artificially sweetened! They actually come with 4 grams of carbs — nearly all in the form of added sugar from sugar and dextrose plus a dash of maltodextrin — to help sweeten and combine the product.

Magnesium stearate helps to bind it together (we’re actually huge fans of both magnesium and stearic acid, a saturated fatty acid), but it’s not enough to contribute 0.5 grams or more of fat, so consider the carb blend to be the main source of calories – 16 total calories per 4 chewable serving.

Perfect to add to your pre-workout energy or post-workout glycogen reload. Carb lovers will obviously want far more than that, though!

You have choices in how you chew:

These initial flavors are so good (Grape is like “Pez candy”!) that we hope more are coming. 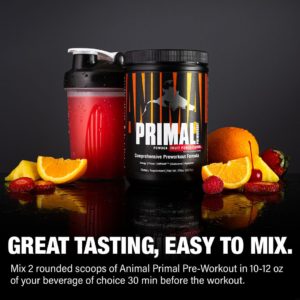 Great tasting, easy to mix, and fierce workouts – Animal Primal is a loaded pre-workout with novel new ingredients to try!

We always suggest 3-5 grams of creatine per day, each and every day. It’s not a hard thing to do, but it’s still an extra thing to do. One more powder to dump into one of your many drinks in the day.

Universal Nutrition has solved that “problem” (which we’ll definitely call a first world problem, but a problem nonetheless) in a very simple manner – by making it fun and delicious and worth a sweet snack! Great for a bit more pre-workout energy (take next to Animal Primal), or a dash of added carbs for your post-workout glycogen carb reload. Either way you want it, we admit that Animal Creatine Chews have us pleasantly hooked, and they’ll probably do the same for you too.

So why are you still drinking your creatine when you can be chewing it?!