Over the past couple of weeks, Arms Race Nutrition has launched two new products: 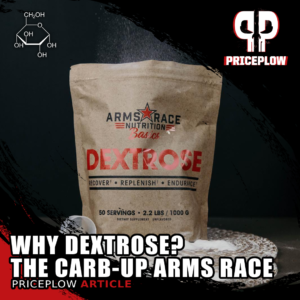 Why Dextrose? We explore the Arms Race of carbs and why it’s fine to keep it simple with this glycogen-reloading carb that’s free of fructose

Since we already covered the incredible Arms Race Vegan on YouTube, we’ll dive into dextrose here:

Dextrose is a simple carbohydrate (sugar) derived from starchy plants, usually corn. It is also known as d-glucose, which is the “right-handed” isomer of the glucose molecule. This is the biologically active form of glucose in your body, and by supplementing it, you’re supplying a direct hit of it.

If you look up the glycemic index of dextrose, you’ll find that it’s 100 out of 100, meaning that its impact on blood sugar is the same as pure glucose and white bread, which is the historical benchmark.

When supplementing dextrose, we’re aiming for speed and digestive ease. It doesn’t hurt that it tastes pretty sweet, too.

Before digging deeper, let’s check price availability on PricePlow, let you sign up for Arms Race Nutrition alerts so you don’t miss other releases, and get on with the dextrose:

The use cases for dextrose

With low-carb diets all the rage, and the mainstream nutrition scene increasingly concerned with avoiding blood sugar spikes, why would we want to consume something like dextrose?

The answer boils down to glycogen – the rapidly accessible form of glucose that our bodies store in muscle and liver tissue.[1]

Whenever we experience something that increases our glucose consumption, whether it be a mental or a physical stressor, our bodies mobilize glycogen and release it into our bloodstream as glucose in order to stabilize blood glucose level.[2] Without glycogen, increased glucose requirements might plunge us into hypoglycemia, a condition that can be life threatening at worst and compromise our mental and physical performance at best.

Glucose is needed by everyone – how fast do you want it?

Even on a ketogenic diet, designed to minimize the consumption of dietary carbohydrates, our bodies still need some glucose – even after full fat-adaptation – and are constantly making new glycogen through a process called gluconeogenesis,[3] using mostly dietary protein as a substrate.[1]

Whether the body can fully replenish its glycogen stores is a subject of intense debate, especially among athletes. A 2021 review in the Journal of Physiology summarizes the position of one camp by pointing out that “evidence to support the hypothesis of the normalization of muscle glycogen content with longer-term adaptation [to carbohydrate restriction] is weak.”[4]

Not everyone can fully refill glycogen stores well without ingesting carbs 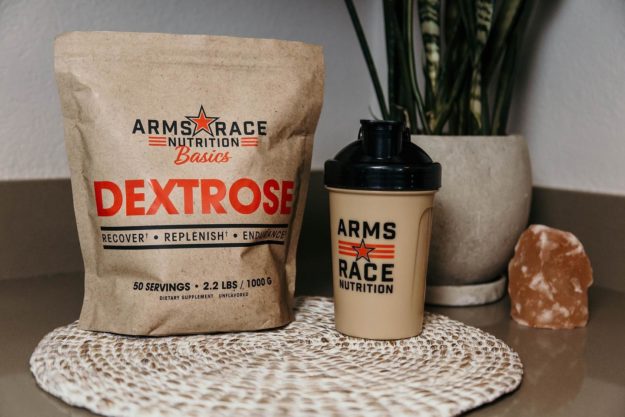 However, absence of evidence is not evidence of absence, and as the same review points out, “Even with moderate intensity exercise, individual responsiveness to K-LCHF (ketogenic/low-carbohydrate, high-fat) is varied, with extremes at both ends of the performance spectrum.”[4] This variability of the individual response to K-LCHF eating could explain why despite the lack of evidence, many elite athletes swear by K-LCHF as an essential ingredient in realizing their physical potential.

In other words, as with almost everything else in the nutrition and fitness world, one size does not fit all. The reality is that while the high-fat ketogenic way of eating might be great for some people, others may find through trial and error that they do better by replenishing glycogen with dietary carbohydrates instead of relying on gluconeogenesis.

If you are in the latter camp, then dextrose is a carbohydrate with some uniquely beneficial properties that you should think about trying.

Let’s briefly go over a few of the reasons why somebody might consider taking a dextrose supplement: 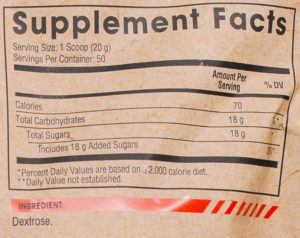 Nothing but straight dextrose.

Setting the K-LCHF controversy aside, there’s a huge body of evidence that dietary carbohydrate intake before and during exercise can increase athletic performance, which has produced the long-standing consensus among exercise physiologists that athletes should consume a couple hundred grams of carbohydrates before an athletic event, and 30 to 60 grams of carbs per hour during the event.[5]

As one 2004 article published in the journal Nutrition puts it, “It is generally accepted that carbohydrate (CHO) feeding during exercise can improve endurance capacity (time to exhaustion) and exercise performance during prolonged exercise (>2 h).”[6]

However, not all carbohydrates are necessarily created equal. There’s a small but intriguing body of evidence that dextrose might outperform other forms of carbohydrates when it comes to increasing athletic performance.

For example, in one study, nine cyclists completed three different 64 kilometer time trials (TT) where each rider was randomized to one of three groups: the first group consumed honey during the TT, the second group consumed dextrose, and the third group got a non-caloric placebo. The results of this were that both groups that got a dietary carb outperformed the placebo group,[7] which is pretty much in line with what you’d expect based on the prevailing consensus.

The interesting thing is that the dextrose group slightly outperformed the honey group, by about 12 seconds (128 minutes and 30 seconds vs. 128 minutes and 18 seconds).[7] This is a minimal difference in time, and doesn’t necessarily count for much on its own. However, measurements of the riders’ power corroborates the story: 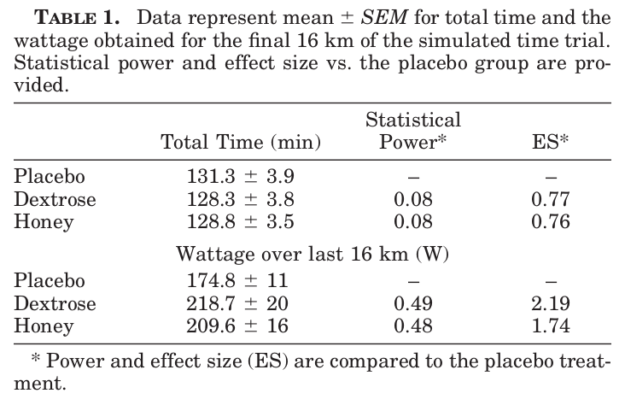 Riders ingesting dextrose had a higher power output than those ingesting honey.[7]

These differences may seem slight, but a 10-watt increase in average power is the kind of return that an experienced cyclist might expect from a whole season of structured training.

In another study, researchers put dextrose up against ribose, a sugar produced endogenously by the human body from food.[8]

The researchers randomized 31 female collegiate rowers to get 10 grams of either ribose or dextrose before and after exercise for eight weeks, and measured their performance in 2,000 meter time trials.[9]

These are intriguing studies, but dextrose is a neglected subject in sports nutrition research. There isn’t nearly enough research on dextrose and athletic performance to say definitively that dextrose is the best choice of carbohydrate, but at this point there is no reason to believe that it will perform any worse than another carb.

However, there is one very good theoretical reason for suspecting that dextrose might be a better choice than, say, honey or sucrose (table sugar): and that is the total absence of fructose in the dextrose molecule.

The chemical structure of sucrose : one part glucose and one part fructose[10]

CAPTION: The chemical structure of sucrose : one part glucose and one part fructose[10]

Whereas table sugar consists of 50% glucose and 50% fructose,[10] honey is often fructose dominant, with the fructose:glucose ratio in honey running as high as 1.6.[11] Although some honeys do contain more glucose than fructose,[11] all honey contains some fructose.

Dextrose, on the other hand, is pure D-glucose.[12] It is chemically identical to the glucose in our bloodstream.[12] 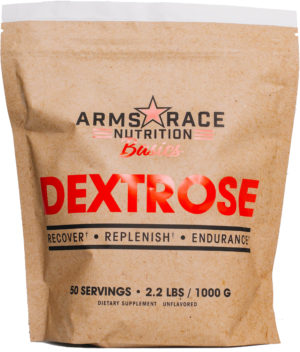 In fact, it’s this lack of fructose that makes the glycemic index of dextrose so high. Whereas glucose is absorbed into the bloodstream where it triggers an insulin response, fructose is metabolized in the liver, and doesn’t actually affect blood glucose levels at all.[13]

As athletes, it’s much better to be ingesting glucose than fructose.

In one 1987 study, researchers depleted the glycogen reserves of rats by forcing the animals to swim for 90 minutes, and then measured their liver glycogen and muscle glycogen levels after re-feeding them with either glucose or fructose. 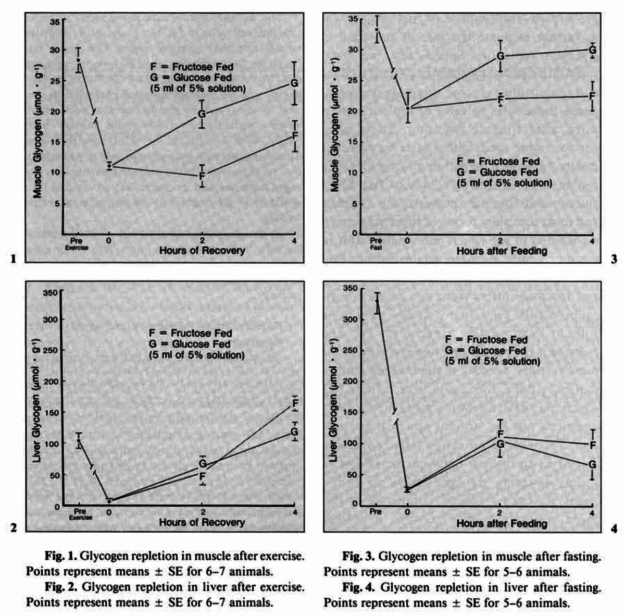 This study determined that glucose was better at replenishing muscle glycogen.[14] Fructose reloads liver glycogen, but dextrose/glucose reload muscle glycogen. So why waste time with fructose or sucrose (which is half fructose)? Cut to the chase with straight up dextrose!

Since muscle glycogen is what we care about in regards to athletic performance and recovery, that means glucose is a much better choice than fructose. 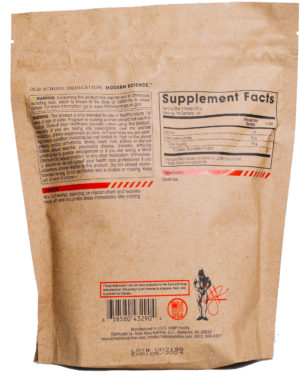 So what does this mean for dextrose? Because dextrose is chemically identical to our biologically active glucose,[12] the results of the above 1987 study should apply to supplemental dextrose as well. We can expect that ingested dextrose will replenish our muscle glycogen more efficiently and inexpensively than other carbs.

If you’re someone who does better mentally or physically with a higher carbohydrate intake, the unique benefits of dextrose for athletic performance are something you should consider when choosing a supplemental carb. The absence of fructose in dextrose means that it will be converted to muscle glycogen much more efficiently than the fructose-heavy carbs typically used in the energy gels and recovery drinks that are so familiar to competitive athletes.

There are many fancy carbohydrate supplements on the market. Some work very well for most users, and some cause nothing but GI distress for others. And a few of these ingredients are ridiculously expensive and complicated.

Sometimes, complexity isn’t necessary. Sometimes, you just need to keep it simple and pump some more glucose into your body for near-instant use and glycogen recovery. When it’s simplicity and low-cost efficacy that you seek, Arms Race Nutrition Dextrose may be all you need.