Posted on March 5, 2022 by Mike Roberto and Nick Andrews | No Comments

A lot of trends in the supplement industry are being driven by the growing consumer realization that supplements aren’t just for getting jacked. Smart supplementation is key for people who want to achieve great things —

And for red-blooded Americans with the classic American can-do attitude, there’s no duo of companies better positioned to help them make this country great than ‘Merica Labz and their offshoot energy drink brand, ‘Merica Energy. 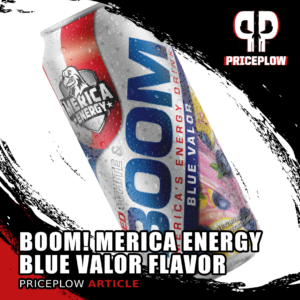 As most energy drink fans know, the Red, White, & Boom Energy Drink was formulated to help you turn your life a notch or ten, helping you to hurl yourself into the all-American high-octane grindset lifestyle. Today, it’s time to drop the latest flavor:

Blue Valor, a blueberry lemonade flavor that’s perfect for hot summer barbecues and long truck rides, has officially launched at the 2022 Arnold Sports Festival. This flavor is an ode to all of the first responders who have put their lives on the line each and every day of their careers.

We first tasted it in our cigar and energy drink fueled guest appearance on Doug Miller and Patrick Mabe’s podcast, The Boss Status (episode 8), and it’s fantastic.

We’ve written about Red White & Boom Energy before, but today we’re going to revisit it and expand a little bit on the ingredients. First, be sure to watch our most epic tasting videos below, and then let’s dig in:

Watch us taste it on The Boss Status:

Long story short? This flavor is a winner. Put it right up there with Patriot’s Punch and Alpine Pew Pew… but Team PricePlow lately has admittedly been very partial to Victory (cream soda) lately!

In a single 16 fl-oz. can of Red White & Boom from Merica Labz, you get the following paired with 200 milligrams of caffeine:

You can read the full story in our article titled ‘Merica Energy: The All-American Energy Drink Gets a ‘Restoration’.

While it’s not as massively loaded as the full-blown Merica Labz Red, White, & BOOM pre workout, this is far better than your average gas station energy drink. Not even close.

Blueberry lemonade not your flavor? Then check out these other incredible Merica Energy flavors: 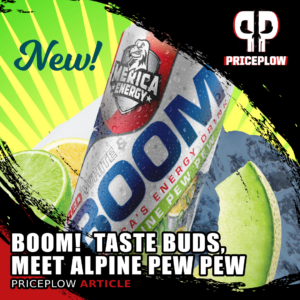 We couldn’t be happier with the resurgence of Merica Energy. This formula is effective, yet affordable and not over-the-top. Sometimes the best formulas are the simplest ones, and that’s definitely true in the case of Red White & Boom Energy. These three solid ingredients all synergize very well, and you can’t go wrong with the flavor. Not too much blueberry, but not too little either.

We love the patriotic edge that Doug Miller and all of his brands at Crush It Holdings have – the team is not afraid to speak up and support the cause of their local patriots.

The question comes down to which flavor you’re going to go for next. Blue Valor is excellent… but so are so many others. Whichever you choose, drink up and enjoy!