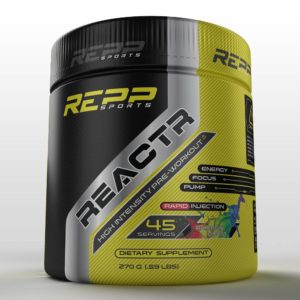 The end of the year is typically notoriously slow in the supplement industry, but 2016 has been exceptionally busy with tons of new products and companies bursting onto the supplement scene.

Repp Sports is one of the newest of the new brands that’s attacking weaknesses in the industry with a few hot products we’ve seen so far. The brand is headlined by their fusion-powered pre workout ReactR that’s sure to have you going nuclear on the weights come workout time.

If this bottle doesn’t catch your attention, we don’t know what will!

We’ve got the breakdown below, but first take a moment to check our coupon-powered deals and sign up for alerts from PricePlow:

ReactR is a rather potent pre workout that packs focus, energy, pumps, and performance in four different proprietary blends. We reached out to Repp Sports to see if they’d be willing to at least divulge the caffeine and DMHA content since this seems to be the area that most heavily impacts a person’s purchase.

Repp gladly responded and said that each scooop of ReactR contains a total of 200mg caffeine combined of anhydrous + citrate, and 100mg DMHA.

Overall, it’s going to come down to how that energy blend was formulated, and that’s why we’re seeing if we can get a few of these ingredients disclosed. 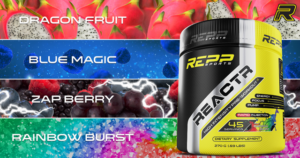 ReactR comes in four rather intriguing and delicious sounding flavors.

ReactR includes a rather diverse array of ingredients formulated to improve all aspects of your workout from focus to pump to energy. But, let’s not kid ourselves, the main thing that’s going to attract everyone to it, is the inclusion of DMHA.

From the outlook, ReactR seems to be an energy-first type of pre workout with the pumps and performance metrics taking a backseat given the lower doses of ergogenics included.

We’ll have to wait and see how the feedback from the user base is on this one as it’s still extremely new and see how it compares to our other top pre workouts.