Here at PricePlow, we’re always on the lookout for the latest and greatest performance-enhancers being researched for sports supplements. One of the newest potential ingredients that’s has received quite the bit of hype in the past year is known as Niagen.

Niagen receives lots of hype as an age-defying wonder ingredient, but a new study shows it decreased performance in rats by 35%.

Initial studies on the ingredient showed it was a proverbial “fountain of youth” for its ability to reverse certain aging actions in the body; however, a new study indicates that while it may pose some benefits, in terms of performance, Niagen could be quite detrimental. 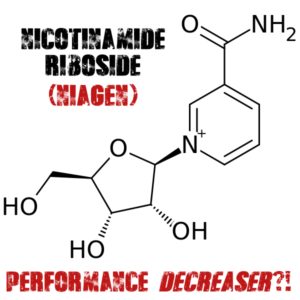 Does Nicotinamide Riboside (Niagen) actually DECREASE performance? Seems like it if you’re a rat….

Before we get to the study, we need to give a bit of an explanation of what exactly Niagen is. Also known as Nicotinamide Riboside (NR), Niagen is a naturally-occurring form of vitamin B3 recently discovered in 2004.[1] Researchers identified NR as a vitamin precursor of Nicotinamide Adenine Dinucleotide (NAD+), an essential coenzyme required by all living cells of the body.

Among the various actions that NAD+ participates in includes:

The drawbacks of lower NAD+ levels

As you can see, NAD+ is extremely important, and declining levels of it have been associated with a number of ailments:

There’s no way to sugarcoat this — the group receiving Niagen saw a 35% decrease in performance!

Taken from the landmark study that showed Niagen as successfully elevating NAD+ levels in both humans and animals.[15]

There’s a host of other maladies from declining NAD+ levels, but you get the picture. So the question becomes, what’s a good way to keep NAD+ levels elevated?

Well, the body can synthesize it from amino acids like tryptophan or produce it from more complex compounds like nicotinamide or niacin. However, researchers also studied a compound developed by Chromadex named Niagen that was incredibly bioavailable in humans and has been shown to not only elevate NAD+ levels in humans, but also reverse certain markers of aging!

Based on this information, a whole litany of products have been made lately touting the benefits of Niagen, yet to date, none of the studies performed had investigated its effects on physical performance – not even in animals.

That is until now!

Click Here to see the study before we begin! 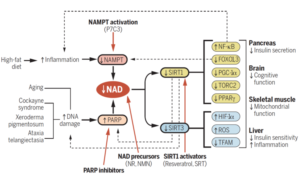 This graph illustrates the negative effects that can occur with declining NAD+ levels. [2]

With the understanding that NAD+ is crucial to energy production, cellular communication, mitochondrial function, and homeostasis, it would stand to reason that supplementing with a substance that increases NAD+ levels would benefit performance. A team of researchers set out to test this very same concept and see if the results matched the hypothesis.

For the study, researchers “enlisted” 18 Wistar rats and equally divided them into two groups that received either Niagen or “saline vehicle” at a dose of 300 mg/kg bodyweight per day for 21 days via gavage.[16] At the end of the 21-day administration protocol, both groups performed a swim test measuring performance.

In such a swim test, the researchers added weights to the rats (at a percentage of their body weight) and incrementally increased them until the rats could no longer swim or make it to the surface within 10 seconds three consecutive times. They then save the rats and write the time down. (Talk about training to exhaustion!)

As you can see from this graph, the group receiving Niagen demonstrated significantly lower performance in the swim test.[16]

In those studies, it was observed that nicotinic acid reduced exercise-induced increases in plasma free fatty acids — meaning it’s probable that NR decreases fatty acid oxidation during exercise resulting in premature fatigue. Furthermore, the redox abilities of NAD+ might also explain the decreased performance due to upsetting redox homeostasis.[19]

By no means is this the final nail in the coffin for Niagen. But it’s a critical piece of research for some who may be interested in taking it for performance-based reasons. To date, a vast majority of the research has been conducted on animals (i.e. rats) with only a few conducted with humans. There are other trials currently underway using humans that will test performance among other metrics.

Niagen may have some beneficial qualities in terms of overall health and fighting the effects of oxidation and aging, but like most antioxidants, it’s best advised to not take them within a couple hours of your workout.

If you do want to compare prices anyway, a popular Niagen product is HPN’s N(R).