When it comes to health and beauty, one of the quickest indicators is to look at the condition of one’s hair, skin, and nails. In order to keep these precious organs as functional and beautiful as possible, we need to give them the tools they need to grow strong and beautiful.

Today, we cover a fun dietary supplement that combines a cross-section of two incredibly popular categories: 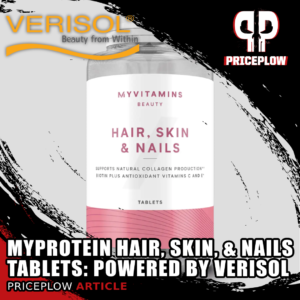 Myprotein Hair, Skin, & Nails Capsules are powered by Verisol. See how 2.5 grams of collagen can lead to great benefits!

With Myprotein’s Hair, Skin, & Nails Capsules, we get a combination of these two and with clinical collagen dosing – but just in three capsules. They can be washed down with some water and Myprotein Multivitamin Gummies, and bring a clinical twist:

While collagen supplements have become increasingly popular the past few years, they generally require large doses — higher than what we can get in capsule form.

For those who don’t want to drink yet another shake, Myprotein has found the solution: Verisol, a trademarked form of hydrolyzed collagen peptides that has four successful clinical studies under its belt — and at only 2.5 grams! This is a perfect inclusion in capsules, which are of course tough to get huge doses that we generally need from other collagen supplements.

In this article, we dive into the four Verisol studies, and quickly touch on the added support ingredients Myprotein included. But first, check our PricePlow-powered prices and sign up for our Myprotein news alerts so that you don’t miss their next major announcement:

Also note that there are Myprotein Hair, Skin, & Nails Gummies, which stack incredibly well with these caps!

In three tablets, you’ll get the following:

Don’t forget that you can stack these with Myprotein Hair, Skin, & Nails Gummies! 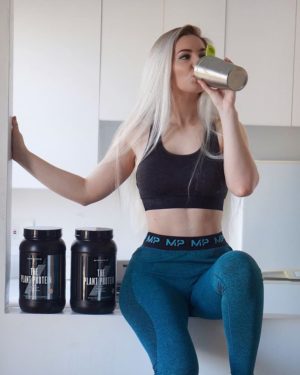 We’ve covered several collagen supplements, and while we love them when marketed appropriately (they’re not muscle-building proteins!), they generally need high doses. However, high doses don’t work with capsules, and this solves that probem!

Verisol simultaneously solves both of these problems, and we’re quite impressed with the depth of research they’ve put together. Most patented/trademarked ingredients don’t have four studies under their belts, but Verisol does. Even more impressive is that two of the studies are six months long, which must have been no cheap feat.

Because of this body of research, we believe that Verisol could be an incredible addition to anyone’s diet. Even though the studies were performed exclusively on women, men should understand that the same basic rules of collagen and skin formation apply to us as well.