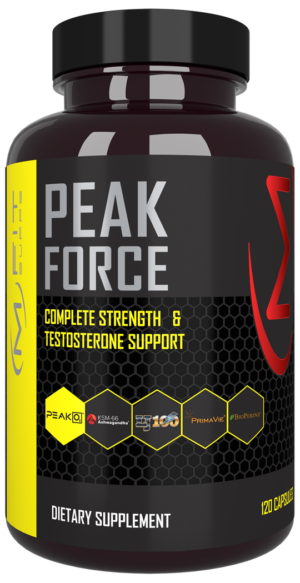 Since first bursting onto the scene at the 2019 Arnold, MFIT SUPPS has done an exceptional job of building their brand. Initially coming to us with fierce pre-workout formulas in Havoc and Trigger, they’ve continued to flesh out their product profile by diving into new areas within the industry. We need formulas that impact our health and fitness missions, regardless of what they may be!

As we age, this mission obviously becomes more difficult. The happenings of natural aging and the stresses of everyday life team-up to form a powerful foe. For men, maintaining proper testosterone levels is one of the more difficult challenges. Testosterone helps regulate hormonal function, strength, and overall vigor, so being able to ward off things that can attack it, such as aging or stress, is imperative.

The latest addition to the ever-growing MFIT family is Peak Force, the brand’s first testosterone-boosting supplement. Designed specifically to support optimal testosterone levels and raise strength and power output for those of us with declining testosterone, Peak Force uses an impressive complex to deliver exceptional effects. With a number of science-backed ingredients at clinical dosages, a signature quality of all MFIT products, Peak Force has the makings of an extremely powerful testosterone-boosting product.

In this post, we’ll break down all there is to know about Peak Force, focusing on its uses, ingredients, and potential benefits! Before we dive into this power-packed formula, make sure you’re subscribed to PricePlow for the latest supplement deals, news, reviews, and interviews!

There are quite a few natural herbs and patented ingredients that can be useful in this case, and luckily for us, MFIT uses a variety of them in Peak Force.

Great formula, and regardless of your age, it’s going to be hard not to feel great from Peak Force.

Who can benefit from Peak Force?

It’s always important that we briefly discuss the purpose of testosterone boosters – when and why is it necessary?

As we alluded to at the beginning of this post, our bodies change significantly as we age, with perhaps the most altered aspect being the internal workings of our hormones. The rate at which the body produces hormones is significantly different in our earlier years – for example, younger men generally have more testosterone than they know what to do with! There are other benefits here, of course, but these levels of testosterone basically make building muscle, staying lean, and feeling strong much easier. 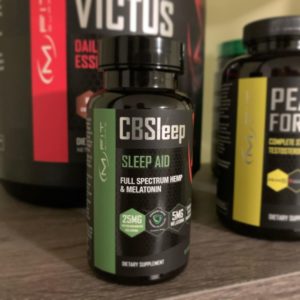 Fire yourself up with MFIT SUPPS Havoc, and bring yourself back down with CBSleep!

Aging men, in experiencing decreased testosterone production, tend to struggle with various challenges, such as decreased cognition, lethargy, lower libido, and loss of lean muscle and strength.[1] In addition, high levels of stress, something that is extremely easy to accrue in today’s fast-paced world, can be very damaging on testosterone production.[2] This dual-faceted attack on testosterone becomes very dangerous in men entering the middle-aged phase of their lives, as their bodies simply slow down from their early-20’s state of hormonal production.

That doesn’t mean that all hope is lost, however. Testosterone boosters can be effective, if introduced under the right circumstances and properly used. If your diet isn’t in check (eg stop eating all that soybean oil) or you’re not prioritizing sleep, don’t expect a testosterone booster to be a quick fix to low testosterone. If you’re still naturally producing the hormone at healthy levels, taking this type of supplement is hardly necessary. But, in aging men with low testerone levels, testosterone supplementation may be viable avenue to regaining a bit of health and vigor.[3]

Now that we’ve covered the dangers of low testosterone, as well as who the market for testosterone-boosting formulas should include, we can recommend Peak Force and its strong profile for the right people!

MFIT’s 2019 Rookie-of-the-Year Performance isn’t over yet!

MFIT SUPPS: Exactly what you need, when you need it.

As we age, our bodies simply cannot keep up with how it functioned in our youth. It becomes a bit harder to build and maintain muscle, to lose weight, to minimize stress (check out Stress-66 if that’s of concern to you!), and maintain hormonal production. In men specifically, testosterone production falling off is highly problematic – it decreases vigor, libido, power, and even confidence! Thus, it becomes incredibly useful to raise testosterone levels in these stages, as it helps one hold on to a bit of the libio and power they once had!

MFIT has introduced a tool for those looking to raise their testosterone levels to where they should be, despite outside factors – Peak Force. This incredibly potent, science-backed formula is an extremely well-rounded product, methodically designed to boost testosterone in hopes of elevating training efforts. With multiple clinically-tested, trademarked ingredients at effective dosages, Peak Force is just what we’ve come to expect from MFIT, and is a welcome addition to their product line!