iSatori will now be a Fit Life subsidiary, but the companies’ stocks are merging.

iSatori, best known for their controversial “enhanced colostrum” Bio-Gro products, recently announced that they plan to merge with FitLife Brands, owners of the GNC-exclusive brands NDS, PMD, and SirenLabs. The merged company will continue operations under the FitLife Brands name.[1]

FitLife almost exclusively sells their products at GNC retail stores, the only exception being the CoreActive line, which is available at a wider range of retailers. The NDS brand mostly focuses on weight loss and toning products. The PMD line is marketed as a higher-end collection of workout supplements for professionals, and the SirenLabs brand is a more general mix of moderately-priced supplements.[2]

The merger extends the FitLife product line, of course, but it also means iSatori products will now be available in 10 new countries. This merger looks to be a winner for consumers, as iSatori’s Bio-Gro line and Pre-Gro pre-workout have been extremely popular as of late. 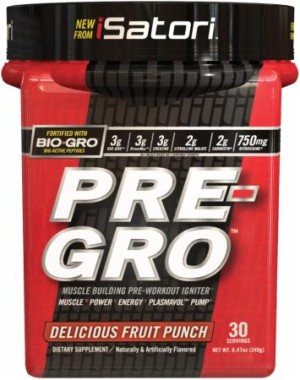 The Pre-Gro reviews have been nothing short of spectacular. We expect iSatori to keep the ship on course.

We’ve discussed the now-defunct Pre-Gro here in the past and also delved into the technical workings of Bio-Gro, which promises to improve protein uptake when taken as a secondary supplement.

While the publicly published research science on Bio-Gro is still limited, iSatori promises that there is a lot on the way. Pre-Gro is at the very least a solid addition to your existing creatine and protein if you’re looking for a new pre workout, and anecdotal user reviews have overwhelmingly been happy with it.

We reached out to iSatori for comment, and they made it clear that this is definitely a merger rather than an acquisition, despite the use of the FitLife Brands name for the combined company. As of the foreseeable future, iSatori will continue to release products under its own name in a subsidiary role, and has no plans to change any of its existing lineup at this time.

iSatori will continue to release products under its original name

iSatori is also forging ahead with their planned development and release schedule for 2015 and 2016. They haven’t dropped any info on new products as of yet, but they did tell us to expect new flavors for existing products during this time.

The merger doesn’t actually get finalized until closer to the end of 2015, with a vote by iSatori shareholders still pending.[3]

So, for all of our iSatori faithful fans – things should be business as usual, at least for the foreseeable future.