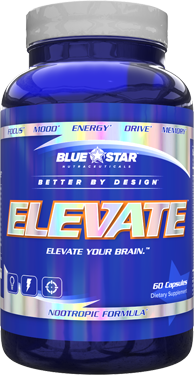 It’s been far too long since we’ve discussed Blue Star Nutraceuticals and their stellar line of products here on the blog. We’ve been on a bit of a brain-boosting supplement kick lately, and have been experimenting with various products to see how they fare in regards to improving performance in both work and workouts.

The latest one we’ve been using is Blue Star’s Elevate, which is an incredibly well-rounded mental productivity supplement specifically formulated to improve focus, performance and memory.

And that leads us to wonder, could this actually be a great gaming supplement in disguise as well? We’ll find out…

The breakdown is just ahead, but you know we gotta make you see the best deal and sign up for PricePlow alerts (coupons included in the prices):

Elevate is a capsule-based productivity supplement that’s almost completely stim free outside of the lone stimulant (Hordenine) included. Blue Star’s brain-boosting supplement is completely transparent and boasts a rather comprehensive formula.to keep you focused and calm even in crunch time!

For enhanced mental performance take 2 capsules 30 minutes before desired results with 8 ounces of water. Do not take within 5 hours of sleep. Do not exceed 4 capsules in a 24-hour period.

One question that we were wondering is “would Elevate be good to stack with a pre workout?”

We reached out to Blue Star for this to see what they suggested, and ultimately, they said it could be stacked, “depending on the pre-workout – a user may enjoy / benefit from the experience.”

However, based off some personal experiences from the staff, they tried stacking Elevate and P.P.K. (Blue Star’s high powered pre workout), and suffice it so say, the results weren’t pleasant (meaning, feeling a little “too stimmed out” to have a productive workout).

So, take away is that if you’re going to consider stacking this with a pre workout, don’t combine Elevate with any other pre workout that has a good dose of nootropics. It’ll be overkill in our opinion.

A better option would be to only use a moderate stim-only product or stim-pump pre workout.

The “best” option would be Elevate and a small/medium cup of coffee… absolutely brilliant and incredibly cost effective!

There have been a flood of excellently crafted mental boosters hitting the market lately. The best trait all of these products have is their versatility. Supplements that help improve focus and cognition can be used for virtually anything, from simply doing work to exercise or even intense video gaming.

Elevate is one of the latest brain boosters in a quickly expanding market that’s grabbed our attention, literally! Don’t let this gem of a product go by before you see another nootropic product hit the wire!