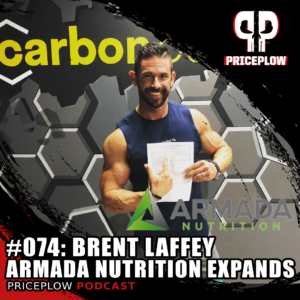 Brent Laffey of Armada Nutrition — a premier contract supplement manufacturer — re-joins the PricePlow Podcast to talk about Armada’s expansion. Armada is well-known for producing some of the world’s most popular supplements in their highly-acclaimed Tennessee facility, but now they’re expanding with an even larger facility in Salt Lake City, Utah.

We bring Brent onto the show to talk about Armada’s history, its other closely-related businesses (such as Prinova of the NAGASE group), supplement technologies such as blending, and the extraordinary amount of testing Armada performs on the products they produce. Then we get into the Utah expansion, which marks a major upgrade in the company’s capabilities and throughput. Along the way, you’ll learn about flavor technology, industry careers, and even types of dairy used in different whey proteins.

This is an incredibly informative episode for any supplement user or entrepeneur, highlighting how to do things the right way — a stark difference from episode #027, where we last invited Brent on the podcast to discuss the ABH Pharma indictment / scandal. The Armada way is clearly the better way.

Show Notes: The History and Future of Armada Nutrition