Herbalife Slapped by FTC for Deceptive and Unfair Acts 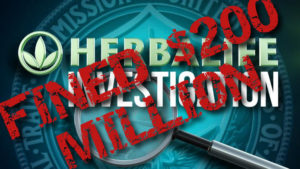 Herbalife has come face to face with the FTC after some rather shady marketing claims and business practices. But did they get off easy despite the large-sounding number?

There’s two organizations you just don’t screw with if you want to have a long and fruitful life in the world of business: the mafia and the government. Cross them, and you will rue the day that you embarked on that path. Yet this time, it looks like the bad guys are ultimately going to win.

According to a press release dated July 15, 2016,[1] Herbalife will have to pay $200 million in FTC charges as well as restructure all of their U.S. business operations! And while that may seem like a lot, in the grand scheme of things, it’s small beans for the corporation, and signals that they can continue with their business relatively unaffected, only with some minor changes.

This stems from a lawsuit in which the Federal Trade Commission sued Herbalife – specifically, it was a lawsuit to push for an injunction.[2] We’ve heard of supplement companies suing the FDA for more freedom, but to get sued by the FTC means you’re in grave trouble.

Click Here to see the FTC’s Lawsuit Against Herbalife

What did they do so bad, besides making overpriced supplements?

Grounds for the Fines

The lawsuit’s second point in the above PDF states the gist of things:[2]

The Complaint charges that Herbalife participated in unfair and deceptive acts or practices by:

$200 million seems an awfully big fine for a company until you understand what Herbalife is and what exactly they were doing. If we’re being completely blunt, Herbalife is a deceptive multi-level marketing scheme, and the Federal Trade Commission now backs that up after investigating as to whether or not it was a full blown pyramid scheme. 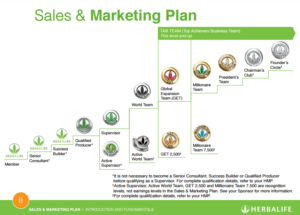 Confused by the structure of Herbalife and similar MLM schemes? Take a look at this chart.

Basically, Herbalife is similar to Mary Kay, Beachbody, or AdvoCare in that there is a pyramid structure organized around different “distributor levels.” So, say, you want to start your own side business as an Herbalife rep, you start at the Distributor level. The next level is Supervisor, then the World Team, then GET Team. Following that, there’s the Millionaire Team, President’s Team, and finally the Chairman’s Club.

As a distributor, you earn 25% retail profit from selling Herbalife products. Once you accumulate 2500 volume points in sales between you and your distributors (other people who sign up as sellers “beneath you”) two consecutive months in a row, or 4000 volume points in a single calendar month, you advance to the next rank which is Supervisor. This process goes on and on, and technically the more you sell and the more people that sign up under you, profits should flow like the salmon of Capistrano.

There are more intricate things to the organization and how distributors “break away” from Supervisor level, but you get the gist.

As you can see, this is a pretty enticing proposition for individuals if they hate their current job or have an affinity for schmoozing people. However, the problem arises when it’s advertised by Herbalife that people can join expecting to quit their jobs by earning thousands of dollars per month and get rich quick.

The FTC takes exception to those claims 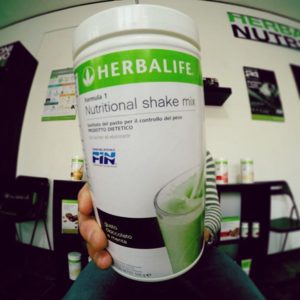 Joining Herbalife gives you discounts on supplements such as this “nutritional” shake that are not priced competitively.

This is where the FTC steps in and starts to look into things a bit closer: It wasn’t supplement claims that got them into trouble, but the claims regarding promoters’ incomes that did!

In the complaint, the FTC alleges that the vast majority of distributors earn virtually no money at all! Additionally, the Feds contend that since Herbalife rewards its distributors for recruiting others to join and “purchase products in order to advance in the marketing program, rather than in response to actual retail demand for the product, causing substantial economic injury to many of its distributors.”

Clearly, this is not an ethical business practice and sets up many individuals for a harsh reality check once they buy into the system.

So, what kind of “hot water” is Herbalife really in?

Well, according to the press release, Herbalife will:

According to FTC Chairwoman Edith Ramirez,

“This settlement will require Herbalife to fundamentally restructure its business so that participants are rewarded for what they sell, not how many people they recruit.

Herbalife is going to have to start operating legitimately, making only truthful claims about how much money its members are likely to make, and it will have to compensate consumers for the losses they have suffered as a result of what we charge are unfair and deceptive practices.”

Although it seems like Herbalife has rolled over and taken their medicine, that may not be quite the case. In a statement released by the company, Herbalife says,

“While the Company believes that many of the allegations made by the FTC are factually incorrect, the Company believes settlement is in its best interest because the financial cost and distraction of protracted litigation would have been significant, and after more than two years of cooperating with the FTC’s investigation, the Company simply wanted to move forward. Moreover, the Company’s management can now focus all of its energies on continuing to build the business and exploring strategic business opportunities.[3]”

“The settlements are an acknowledgment that our business model is sound and underscore our confidence in our ability to move forward successfully, otherwise we would not have agreed to the terms.[4]”

This is a victory for Herbalife

Why are they so happy? Because this was actually a win for them. By not being officially called a pyramid scheme, they do not need to change their core business model. They can continue to do the same general type of marketing, but just need to tone down the claims and show a bit more data.

Their stock went UP!!!

This is the only time we’ve seen a stock price go up after receiving such a major fine.[5] In fact, after the news broke, HLF shares went up 18% and so far are staying there!

The man who lost $500 million betting against Herbalife

There were big losers in this matter, too. Bill Ackman, an American hedge-fund manager who founded Pershing Square Capital Management LP, has been shorting this stock since 2012. All told, Forbes estimates that the financial activist lost half a billion dollars in this endeavor.[6] It’s worth noting that in the past, Pershing also had activist campaigns against McDonald’s and Wendy’s.

And Ackman’s not unloading his shorts yet. He still wants to see Herbalife get taken down, hoping that this is going to signal the beginning of the end for Herbalife’s sales. Balls.

Here’s what Pershing Square Capital Management had to say in a press release:[6]

Under Koscot, Omnitrition, Vemma and other key FTC pyramid scheme cases, the above findings constitute a pyramid scheme. While it appears that Herbalife negotiated away the words “pyramid scheme” from the settlement agreement, the FTC’s findings are clear.

We expect that once Herbalife’s business restructuring is fully implemented, these fundamental structural changes will cause the pyramid to collapse as top distributors and others take their downlines elsewhere or otherwise quit the business.

We congratulate the FTC for enforcing the law that will lead to protections for consumers in the United States and the rest of the world.

The FTC wimped out

In our opinions, the FTC took a “moral victory”, but it will do more damage in the long run. They chose to settle on $200 million, without taking this to court, making it seem like a win. 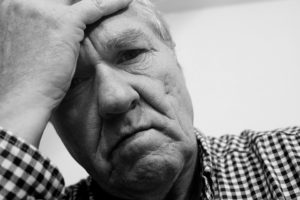 However, if they had 1/10 the guts of someone like Ackman, they could have pressed the matter in court, and potentially crushed them. This reeks of the FTC not only wimping out, but selling out as well. And while their bank account is recharged with millions of dollars, the consumers are still the ones who ultimately lose.

Same annoying sales reps, but perhaps fewer of them

Sadly, this means there will be no end to the annoying Herbalife sales people spamming the web, nagging their former friends on social media, bothering people at gyms.

Hopefully they’ll be a bit more educated on what they can earn, though, and there will at least be fewer of them. Hopefully they will see the news releases with the words “deceptive” and “unfair” when they look to signing up. But we don’t like to rely on hope, and that’s why this is currently a net-negative decision made by the Federal Trade Commission.

The moral of this sad story?

While this was a win so far for the company and their stock, it’s still a feather in the hat for those of us who like promoting quality products that are not ripoffs. It also means that there’s an official government statement regarding Herbalife’s deception, which may sway salespeople-to-be to look elsewhere. After all, why join a group when your chances of making even $5 are low?! 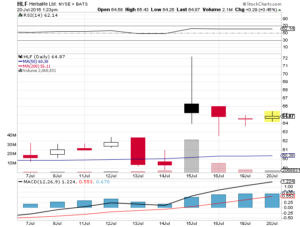 Did Herbalife’s Stock just go up after getting a $200MM fine? You bet. Welcome to 2016. Image courtesy StockCharts.com

Herbalife isn’t the only one out there doing this though. There are tons of health and nutrition companies that follow this model as a promise to “follow your passion” and get rich quick! Unfortunately in life, there is no “free meal” or shortcut to wealth and happiness.

It takes hard work, dedication, and busting ass each and everyday to make your dreams a reality, you won’t get that way just by signing up in one of these bogus pyramid schemes. It works that way in the gym, and it works that way in business too.

Given the number of other organizations out there that follow similar business models, it will be interesting to see if the FTC’s attack on Herbalife will affect their bottom line, or will they continue to rampage our industry with overpriced products for more time to come?