Is Tamiflu Inferior to Echinacea Supplements for the Flu? 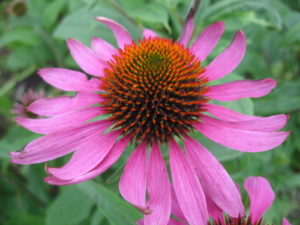 A new study investigates whether an echinacea-based drink can be as effective as Tamiflu in combating the seasonal flu virus.

There’s been a huge movement to be more “natural” in our society in recent years. Consumers don’t want artificial sweeteners or dyes in their foods or supplements. They want only free range, grass fed meats that aren’t treated with antibiotics. Medical patients are even embracing alternative forms of medicine in an effort to find a more holistic approach to healing rather than relying a prescription painkillers, opiates, and other lab created drugs.

So what about the flu?

Sure, you know the old wives’ tales and grandma’s secrets for treating colds, flu symptoms, and sore throats, but they’re not always backed by science. And they often can’t compete with the marketing money of big pharma. But this time, it’s different…

Some interesting new research indicates that a common herb may be more effective than a major prescription medicine in fighting the flu. 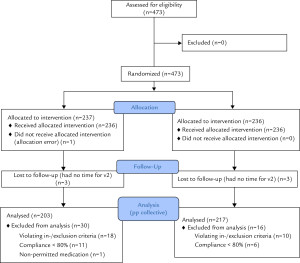 473 patients displaying early flu symptoms (≤48 hours) were admitted to various primary care centers in the Czech Republic. The patients were randomized to 10 days of an Echinacea purpurea-based formulation, called Echinaforce, or 5 days of Tamiflu followed by 5 days of placebo.[1]

Nasal samples were collected from the patients via nasal swabs and sent to the Provincial Health Services Authority British Columbia Center for Disease Control in Vancouver, Canada. Samples were then analyzed for influenza virus detection via reverse transcription polymerase chain reaction. 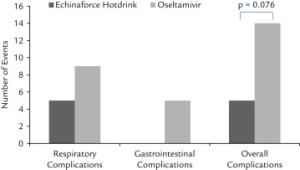 The group consuming the echinacea-based drink experienced less flu-like side effects such as nausea and respiratory complications.[1]

Turns out there were quite a few dropouts and complications during the course of the trials. Of the 473 patients involved in the trial, six didn’t show up for the final appointment and one other patient didn’t receive the allocated intervention. Additionally, 18 Echinaforce and 10 Tamiflu patients had major protocol violations, and compliance in 11 Echinaforce Hotdrink and 6 Tamiflu cases were <80%. One patient also took medication not permitted during the trial.

Thankfully, these patients were all excluded from the efficacy analysis, and ultimately, a total of 203 Echinaforce Hotdrink and 217 Tamiflu patients were included in the final analysis. Apparently, following directions is hard.

Recovery from illness and symptoms was comparable between the two groups, with Echinaforce Hotdrink vs Tamiflu, respectively:

Similar results were found in the patients that had confirmation of the flu virus and not merely flu-like symptoms. So basically, one day in, the drug works a bit better, but some time after that… echinacea outperforms!

Most importantly, the Echinaforce group experienced less complications than the Tamiflu group as well as fewer ill effects associated with the flu, such as nausea and vomiting (discussed below). 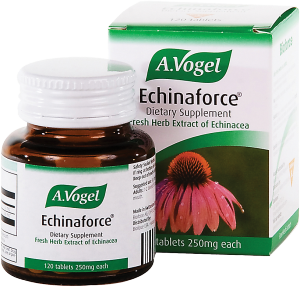 Echinaforce may not be a ‘cure’, but it certainly performs well after 10 days. Worth having some in the house just in case.

So can herbal remedies really stand toe-to-toe with over-the-counter (OTC) options for combating the yearly flu?

Maybe, maybe not, but it seems like it here. The trial shows comparable results between the two but this is far from a slam dunk in favor of herbal remedies. The authors declared that Echinaforce Hotdrink was at least as effective as Tamiflu was in treating clinically and virologically confirmed flu infections.

But think of this: 15% of people who got the flu and used a prescription drug did not get better after a week and a half. Is that the best we can do? Billions of dollars later, and a flower extract used in the 1700s[2] is still beating big pharma?

Yet we’ve seen probably an hour’s worth of Tamiflu commercials this year, and we’re not even big TV watchers. We can’t do better than this? How long is it going to take for us to figure virii out?

Where can I get Echinaforce?

Since this is PricePlow, we have to show you our price comparisons below before getting into potential side effects.

Does echinacea have side effects?

The group consuming the echinacea-based drink experienced less flu-like side effects such as nausea and respiratory complications.[1]

Echinacea is extremely well-tolerated in most individuals, and studies haven’t found any serious adverse events.[3,4]

The biggest risk, however, is allergic reaction. A good barometer to tell if you might be allergic to the flower is if you have a ragweed allergy.[5]

So if you’re allergic to ragweed, it’s best you go the prescription, OTC, or “tough it out” route.

What about the Tamiflu Side Effects?

According to Genentech USA, Tamiflu has the following side effects:[6]

All other side effects were the same as placebo, which is important to note because it’s tough to differentiate what’s an actual side effect and what’s a flu symptom!

So, with Tamiflu, your biggest risk is vomiting more, yet you might have less diarrhea. Not a pleasant trade-off everyone wants to make, but worth considering.

With the new research showing the efficacy of echinacea, will you continue to use medications like Tamiflu? Image courtesy Tamiflu.com

One thing to note is that the study was sponsored by A. Vogel Bioforce AG, Roggwil, Switzerland, manufacturer of Echinaforce Hotdrink; however, the authors stated there are no other conflicts of interest regarding the content of this article.

We wouldn’t recommend eschewing common medical practices for herbal remedies, but the research is at least intriguing. If you have an aversion to using medications or just looking for something new to try when you get sick, Echinacea-based products may be an avenue to try to help improve symptoms.

There are a few kinds of people out there, but amongst them are those who will take any chemical, anytime to get the job done. And then there are those who avoid prescription drugs at nearly all costs. Neither one is always right or wrong, and the truth is often somewhere in the middle, but sometimes one is better and safer.

When it comes to Tamiflu, the case can be made for the latter, not the former.