It’s been way too long since we’ve talked about Raw Nutrition RAW PRE – a low-stimulant pre-workout supplement for those who don’t want as much caffeine as Raw Nutrition’s CBum Thavage Pre or Raw Pre Extreme.

Well, Revive MD / Raw Nutrition sponsored athlete Vaughn Walker is giving us a great reason to talk about it again – an exclusive, limited-edition SOUR flavor of RAW PRE – and word is that it’ll be back! 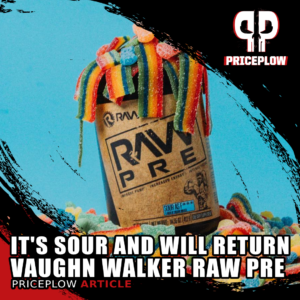 Vaughn Walker has a new limited-edition flavor of Raw Nutrition’s RAW Pre — with just 100 milligrams of caffeine in 2 scoops — and it’s SOUR as F***!

Raw PRE, which sports just 100 milligrams of caffeine per two-scoop serving, was actually Raw Nutrition’s first pre-workout supplement. This showed that the brand’s founders — Matt Jansen and Dr. Domenic Iacovone — were more interested in performance than just getting athletes stimmed up.

Of course, the higher-charged pre-workouts eventually came, especially with the addition of Chris Bumstead to the team, but it was really Raw PRE that was one of the first six supplements launched by the brand. But sometimes, you just need a little charge-up, but want a fully-powered pump. Great for weaning off stimulants, mixing with a moderately-stimmed fat burner, or workouts that are later in the afternoon.

Coming back to the Vitamin Shoppe

In this article, we recap the RAW Pre formula, drop our flavor analysis to see just how sour it is, and get you signed up for our Raw Nutrition news alerts — because word is, it’s going to be available at The Vitamin Shoppe, and we want you ready to go:

For a full analysis, you can read our article titled RAW Nutrition RAW PRE: Low-Stim Pre-Workout (100mg Caffeine), and that title says it all — low-stim is the name of the game here! But caffeine isn’t the only stimulant, as we also have some added synephrine from citrus aurantium.

Each two-scoop, 19 gram serving of RAW Pre has the following:

Again, you can see the bigger details in our main RAW Pre blog post. 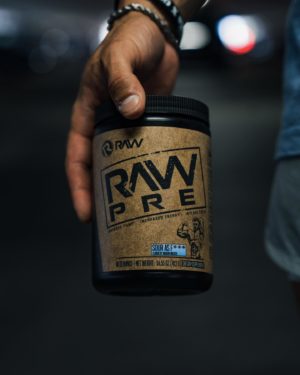 Here’s an up-to-date list of all RAW PRE flavors:

RAW Pre: For Those Who Don’t Need a Stim-Bomb

When Raw Nutrition first launched, we were impressed that their first pre-workout was a low-stim one in RAW Pre. This is an athlete’s brand, and ergogenic performance comes first.

“We really wanted to make a brand that focused on the individual raw ingredients and not cut corners when it came to the amounts of the most beneficial ingredients from a performance perspective. Our slogan is ‘From the Ground Up’, which simply means taking the most researched ingredients at the doses that are shown to induce the most amount of positive benefit for that ingredient within its individual category and turning them into the best overall products.”

Well put! You can sign up for Raw Nutrition news alerts to get notified when new products, flavors, news, and sales are available – especially this sour flavor, which we know is coming back after this has been published!