Pepper Your Angus: The Legacy of Pink Magic PLATINUM!

Guys, you’re not going to believe this one.

I just bumped into an old friend who works up the chain at GNC, and we got on the topic of fat burners.

I mentioned that I started using the new USPLabs EpiBURN Pro, which, 3 days in, I’m loving so far.

He says, “USPLabs? I can do you one better:” 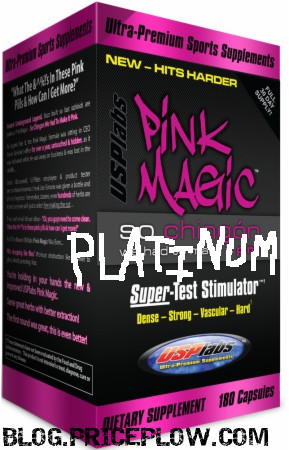 Pink Magic PLATINUM is coming! Get ready for the long awaited – and likely controversial release!

And that’s all he says.

That’s right, he confirms, Pink Magic is coming back.

He wouldn’t tell me anything about it, but he said that it’s coming back in the way of “Pink Magic Platinum”, and it’s going to be exclusive to just one store — GNC.

“Consider it Pink Magic Advanced” is basically all I could get out of him.

In case you weren’t around this industry 4-5 years ago, this one caused quite the online stir, to say the least.

We’ll get into the story below.

What will the Pink Magic Platinum Ingredients be?

This section was updated July 29, 2014 with proper dosage and new image. 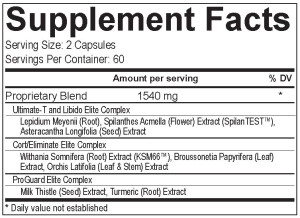 The ingredients have been leaked to the right. There are two proprietary complexes, weighing in a total of 1540mg.

Update! The ingredients write-up is so long, we put it in a separate blog post. See our Pink Magic Platinum Ingredients page for a VERY detailed analysis on it!

Once again, see our Pink Magic Platinum Ingredients page for the full breakdown!

One important note is that the main ingredient from the original Pink Magic, massularia acuminata, is not to be found here. So this product will obviously behave differently (but hopefully better).

In early 2010, hot off of the success of their Jack3d pre workout supplement and OxyELITE Pro fat burner, USPLabs went after the natural testosterone booster world in a big way: they opened beta testing on a mysterious new product and did not state what was in it.

All they said was that it was a “natural anabolic or test booster”.

I was one of the beta testers, and let me tell you something… those were some fun times.

Every single beta tester broke PRs or made gains of some sort. Everyone was excited, and we all knew this stuff would sell, especially when attached to the “Jack3d brand”.

For me, Pink Magic was my first foray into hormonal supplements (something I’m not active with now), so I wasn’t sure what to expect… but my strength gains were through the roof.

Placebo or not, I didn’t care – For the first time in my life, I was pressing 110lb dumbbells for easy reps. Not bad for a swimmer guy who weighed 180lbs.

The beta was hugely successful, and so was the product launch. But then came the real fun. 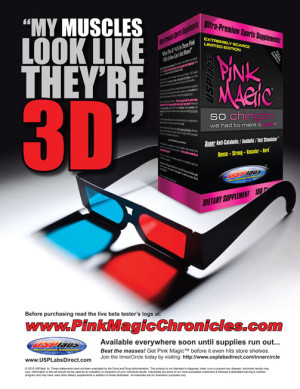 The ad that started the never-ending hailstorm of flak directed towards USP, which still goes on to this day

If you want to bring the haters out in legion on the Bodybuilding.com forums, here’s how you do it:

As you can expect… the forums lit up. 3D muscles!!

Now remember, this is when TV manufacturers were pushing 3D TVs, so it fit the time. But boy did it stir the pot and then some.

But the product worked for many, and boy did it sell

But for as much criticism as some received, Pink Magic was a great introductory natural testosterone booster for some, and it sold. It sold well.

I know because for quite some time, the original PricePlow ranked #1 in Google for it.

In fact, it sold so well that to this day — over four years later — customers are still walking into retailers asking if they have a new Pink Magic.

At some point, they must have called USP up and said it was time to do it.

And that’s where we are today.

What was in the original Pink Magic? 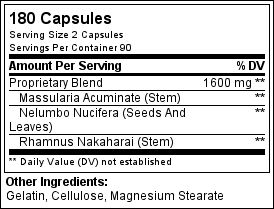 The main ingredient was massularia acuminata, an African herb. In case you’ve heard of it from elsewhere, it is still available from a completely unrelated company, in AI Sports Nutrition’s Massularia[1].

We have no clue if massularia will be in Pink Magic Platinum, but if anyone cares, we’ll see if there’s any new research since the last time we checked in 2010.

What happened to Pink Magic anyway?

To be honest, I don’t know. Maybe someone can chime in.

By the time it was discontinued (around 2012?), we were no longer on top of Google for Pink Magic searches (or anything else for that matter) and we had plenty of other problems to deal with. We kind of lost touch with the whole thing.

All I know is this: despite all of the forum hate, that stuff worked like crazy for me on some level, it sold well, many customers absolutely loved it…. and those damned 3D sunglasses can still be seen to this day on some users’ avatars in the Bodybuilding.com forums.

I, for one, look forward to this release… and the 3D glasses inspired flamewars that will ensue. Pepper your angus, folks… Pink Magic is coming back!

Update from 2019: Unfortunately, this and every other USPlabs supplement are long gone. But this story is too good, so we’re keeping it around. You can see all Natural Testosterone Boosters on PricePlow if you need a natty test boost.