All has been quiet on the DMAA front, pending Hi-Tech’s DMAA Lawsuit Appeal to the 11th Circuit, a decision we’re still waiting on after oral arguments were heard in August 2018.

We finally have a bit of an update, but it’s important to stress that Hi-Tech is still under an order from Judge Alan Braverman that they cannot manufacture, sell, or distribute DMAA supplements. 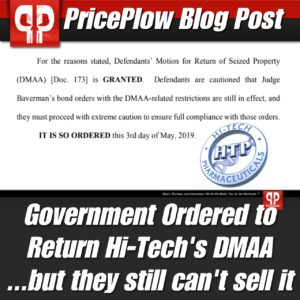 Even though they still can’t sell it, the government had no right to detain it, so Hi-Tech is getting its DMAA back!

Earlier in this entire ordeal, in an “unrelated” matter regarding different supplements, Hi-Tech was raided and Jared Wheat was arrested over ingredients in their red yeast rice supplement and DHEA-based prohormones. Those are separate matters, but they were used to raid Hi-Tech of their DMAA supplements as well — five tractors worth!

When the indictments were unsealed against Wheat, it became clear that DMAA was not even mentioned in this case, which begged the question why the feds would raid them of DMAA instead of just the red yeast rice and DHEA supplements in question.

In order to receive bond, Wheat was ordered/coerced to stop manufacturing, selling, and distributing DMAA supplements, an order which he agreed to and is still under. While the timing and circumstances under which all of the above happened are still extremely questionable and concerning, they are still legally binding. But Jared Wheat and Hi-Tech of course aren’t stopping their fight that easily:

After arguing that the indictment which led to the above raid had nothing to do with DMAA, Hi-Tech fought for its DMAA-containing products back. And even though they cannot sell it, on May 3, 2019, United States Magistrate Judge Catherine M. Salinas ordered the government to return Hi-Tech’s DMAA back to them:

The summary of the document is that DMAA is not currently illegal for Hi-Tech Pharmaceuticals to possess, and the government did not prove why they should have it detained. Because of this, they’re ordered its safe-keeping with its owners, Hi-Tech.

What’s crazy is that it all amounts to five tractor trailers worth of supplements – which goes to show how much they were selling back in the heyday of Mesomorph, Lipodrene, and the rest.

Ultimately, everything still falls on the DMAA lawsuit appeal to the 11th circuit, but this marks a small win for Wheat, and can be used to show how preposterous this situation has gotten.

Stay tuned to PricePlow, we have more to come but it’s the 11th circuit appeal that’s the biggest news we await.