Look, we’ve all been there – no matter how much you typically look forward to training, sometimes you’re apathetic about it. Maybe you’ve been on the same program for a while, and it’s become mundane. Maybe yesterday’s session was brutal, and you’re just so sore and don’t feel as recovered as you should be. Now, imagine being an athlete training for a specific competition – whether it’s a meet, race, or game, you’re likely living out both of these scenarios simultaneously!

While there are definitely other means to stay motivated, one thing should be prioritized above all else: recovery. If you’re feeling well-rested before a training session, you’re more likely to attack it with the tenacity and desire needed to yield results. However, being adequately recovered isn’t always a given. Your nutrition and sleep must be on point, sure, but sometimes you need a little bit of safe, proven help to fill this void in recovery.

You know about the greatness of eggs, but did you know about fertilized eggs? MYOS RENS has found something spectacular inside…

Scientists from Myos Rens Technology understood this, and have thus formulated something that can fill that gap. In YolkedⓇ, they’ve released a cutting-edge sports nutrition supplement developed to facilitate muscle growth and recovery. Through the utilization of FortetropinⓇ, a proprietary ingredient made from fertilized egg yolk, YolkedⓇ helps you build more muscle and recover faster from workouts so that you can get back in the gym at full-speed. It’s all-natural and NSF Certified for Sports, and even if exercising isn’t necessarily your job, so long as you treat it like it is, you can benefit from this innovation, too!

We’re about to tell you all there is to know about this novel ingredient, and just how influential it can be in helping you get back to the gym the day following a tough training session. But, before we dive in, be sure to check out PricePlow for all of our supplement deals, news, reviews, and interviews!

FortetropinⓇ – Don’t throw out that yolk!

Egg yolks, mistakenly, have grown quite the unpopular opinion over the past 15 or so years. With the “counting your calories” and “anti-fat” movements having seemingly taken over the health scene, egg yolks were pushed out the door for their low-calorie, high-protein replacement, egg whites. How short-sighted this was! 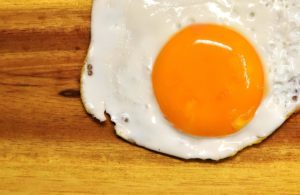 Don’t throw out that egg yolk! These nutrient-dense “perfect foods” have long been used for better performance… but can we get even more from fertilized eggs?

According to the USDA, eggs are among the most nutrient-dense, power-packed foods on the planet.[1] They’re loaded with vitamins and minerals, many of which are difficult to find in other foods. In addition to all of that, 1 egg packs around 70 calories, with 5g of fat and 6g of protein. The key here, however, is that virtually all of the nutrition is contained within the egg yolk. Sure, egg whites contain the majority of the protein content, but by simply tossing out the brightly-colored center, you’re missing out on a whole lot.

Here’s a quick list of everything you’re getting if you consume a whole egg: 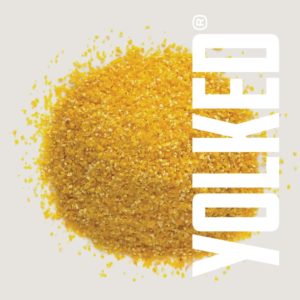 The FortetropinⓇ in YolkedⓇ powder has been shown to downregulate the ubiquitin pathway, which breaks down muscle.

Clearly, there’s a lot going on inside an egg. In fact, there’s so much nutrition packed into that shell that is actually very powerful. Thankfully, FortetropinⓇ harnesses the power of these hidden compounds using proprietary, low temperature technology.

Muscle growth and repair is facilitated through mammalian target of rapamycin (mTOR) activation. Igniting mTOR triggers muscle protein synthesis (MPS), which allows your body to build new muscle. Fortetropin has been shown to upregulate mTOR pathway. When we exercise, we essentially tear down our existing muscles, with the hope that proper nutrition and recovery will allow them to grow back bigger and stronger.

Muscle tissue breakdown occurs through a pathway called ubiquitin proteasome. Fortetropin has been shown to downregulate the ubiquitin pathway. In addition, Fortetropin lowers serum levels of myostatin, a negative regulator of muscle growth naturally present in our bodies.

Does Yolked actually get you yolked?!

YolkedⓇ is being touted as a next-generation recovery agent first, muscle growth enhancer second. Claiming that kind of potential is definitely a big swing, so let’s see if, based on research, it steps up to the plate!

There are so many supplements and ingredients out there these days that are banned in competition, it’s critical to know what is permissible for drug-tested athletes. 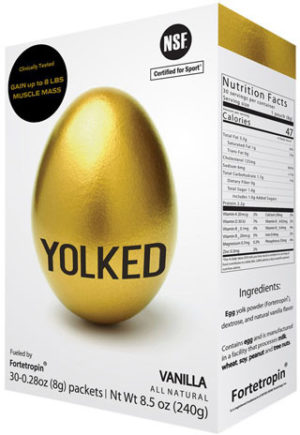 YolkedⓇ is NSF Certified for Sport

The World Anti-Doping Agency publishes a list of prohibited substance for athletes annually. NSF is an internationally recognized independent testing and certification organization which is accepted and well respected by the regulatory bodies, universities and professional sports organizations. Every lot of Yolked is tested quality and potency by NSF and certified to be free of WADA prohibited substances, so if you’re a professional or drug-tested athlete, you’re good to go!

High-volume training requires next-level recovery. Training hard each and every day to reach your goals can be draining, both physically and mentally, especially if you’re not fueling up with adequate nutrition or sleeping enough. Even if you do have those things covered, getting a little help could still do you some good!

When you consider all of the nutrition packed inside eggs, clearly they should be part of your daily diet. However, even if you eat a couple every day, why not get more of the stuff within eggs that can really help you recover? 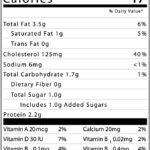 YolkedⓇ FortetropinⓇ is manufactured from fertilized egg yolks via a proprietary technology that pasteurizes and dehydrates them to a powder at low temperatures thereby retaining the biological activities of the bioactive molecules within egg yolks that leads to enhanced muscle growth and recovery. It’s been certified the NSF to be Certified for Sports, and is completely safe for drug-tested athletes. This extremely innovative product is both convenient and effective, so novel that there really isn’t much else out there that can match up to it. Improve your recovery and get YolkedⓇ!