Vegan and plant-based diets often go hand-in-hand with goals of weight loss. While dietary choices (such as what, when, and how frequent to eat) are most important, the key to long-term success in any diet is conquering hunger and appetite over the long-haul. This is done by leveraging protein, avoiding addictive / dopamine-spiking / inflammatory foods, and controlling the blood sugar roller coaster. 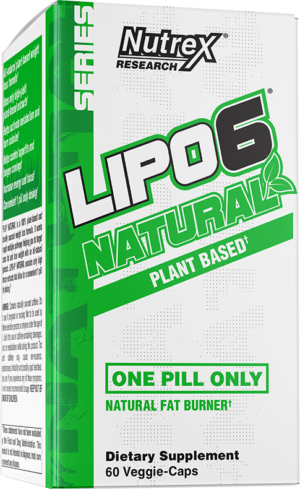 Lipo-6 is an award-winning fat burner, and now it comes in a Natural and Plant-Based version!

But along the way, it’s nice to pick up the metabolism and kick down the appetite with a well-formulated fat burner. And while most fat burners are actually already vegan (depending on the capsule), most are definitely not plant-based, as there are several synthetic ingredients on the market.

Nutrex Research already has you covered in keeping protein high with Nutrex Plant Protein, but those looking for a plant-based thermogenic stimulant don’t have many great choices. Thankfully, that all changes as they’ve released Lipo-6 Natural, an all-natural version of their famous weight loss supplement. Aligning itself with the modern trends of all-natural and convenient, Lipo-6 Natural is packing a highly effective formula without the synthetics that most of its competition poses.

In our continuation of our coverage of the Natural Series from Nutrex, this post is going to break down all you need to know about Lipo-6 Natural. We’ll get into its ingredients, its benefits, and how it stacks up to the rest of the market! Before we get into all of that, be sure to subscribe to PricePlow for the best supplement deals, news, reviews, and interviews you can get!

Lipo-6 Natural is an easy one pill serving!

How many times have you bought a pill-based supplement, be it a fat-burner or a multivitamin, and are appalled by the serving size. You look at the label and find out that you need to guzzle down somewhere between 3 and 6 massive capsules in order to reach a full serving. That’s never fun, is it?

Lipo-6 Natural packs all of its ingredients into one capsule! While taking similar products can sometimes be a chore, that’s not the case here. Not only is this a one-stop shop for the fat-burning effects your heart desires, but each capsule is also 100% plant-based. That means it’s safe for use for vegetarians and vegans alike. Nutrex is delivering one of the most convenient, versatile fat-burning supplements we’ve ever seen!

Now that we’ve covered all of that, let’s get into what the ingredients in Lipo-6 Natural can do for a healthy individual looking to enhance their fat-burning efforts!

Advisement: At nearly 250mg caffeine, this is a strong pill, especially for anyone who can’t handle a serious hit of caffeine!

Each bottle of Lipo-6 Natural comes with 60 servings. Here’s exactly what you’ll be getting in each one-capsule serving.

Nutrex has been crushing it!

Nutrex is one of the industry’s most well-known, most reputable brands. They’ve been around for quite some time, and have made a major impact within the supplement game. Their products have been around seemingly forever, yet they’ve never failed to innovate and remain a step ahead of the competition.

Although they’ve launched a variety of different product series, they’re truly making noise with their Natural Series. This line of all-natural supplements are made for virtually everyone, fully accessible no matter which dietary or lifestyle restrictions you may have. Whether you’re vegan, gluten-free, or follow some other crazy diet, the Natural Series has something for you! 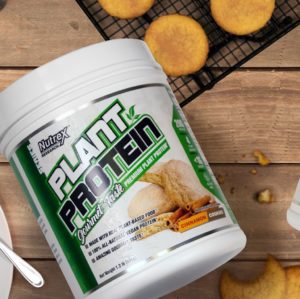 Nutrex Plant Protein is also out, and this Cinnamon Cookies flavor is so good!

Before we dive into the Lipo-6 Natural, we’d like to highlight a point that some often neglect. While they can be effective, weight loss supplements are, by no means, a be-all-end-all in your quest to lose some pounds. Yes, the ingredients we cover can aid in proper weight loss, but they don’t necessarily cause weight loss.

If you’re trying to lose weight, it’s absolutely imperative that you make sure your diet is in check. This becomes even more important when you’re looking to cut fat and maintain as much muscle mass as possible. Simply put, your macros need to be in check. In addition to that, your training must be put in check. Mindlessly performing the same lifts, or logging endless hours of low-intensity cardio just won’t cut it. If you’ve got your diet and workouts dialed in, an additional boost from a weight loss product can definitely be useful!

One other important point – these supplements are meant for healthy individuals. If you’re dealing with hormonal issues or other medical problems, then perhaps getting those sorted out before experimenting with a fat-burner is in your best interest. In short, make sure your body is running as smoothly as it should be!

Weight loss and fat-burning supplements are meant to be just that – supplements. They’re not the key to the door of proper weight loss. Rather, think of them as the door-stopper that holds that door open, giving you access to enhanced results assuming everything else is already in check. People these days tend to lose sight of all of this, and it’s something you really just hate to see. We just wanted to take some time to point this out before moving on!

Conclusion – an easy, effective fat-burner for the masses!

As Nutrex’s Plant Protein may just be the best-tasting plant-based protein powder we’ve ever tasted, our expectations for everything else in this line are high. In addition, given the popularity and effectiveness of the multiple iterations of Lipo-6, this all-natural version had a high bar to clear.

Nutrex has gone Natural! Some of the industry’s most trusted supplements now have a Natural Series counterpart, for those looking to avoid artificial ingredients!

Lipo-6 Natural packs everything you want in a fat-burner. With ingredients that target satiety, others more concerned with metabolic rate, and even hormonal support, Lipo-6 Natural lives up to any precedent set for it. While some of the doses, admittedly, are less than ideal, they’re still adequate enough to deliver a solid weight management experience.

Oh yeah, how could we forget to mention this – it’s all-natural and is only a one-pill serving. You’re not putting any crazy, artificial ingredients into your body, nor are you guzzling down a ridiculous amount of golf-ball sized capsules. Nope, one capsule a day, and you’ll be on your way to body recomposition!

Check back with us soon to see what else Nutrex has coming down the Natural Series pipeline. Hint – it’s legit!