Ryse Supps may have been founded just a few years ago, but they’re quickly becoming one of the most influential brands in the industry. They have a huge social media presence, sponsor big name athletes, and most importantly, create high quality products. However, Nic Stella, CEO of Ryse, is always on the hunt for more. He’s never satisfied.. which is why Ryse has accomplished so much in such a short amount of time.

Last month, we covered Ryse Blackout RTD, an expertly-formulated pre workout drink that you can keep cold in your fridge and drink on-the-go. Even though Ryse was not the first company to produce a ready to drink pre workout, they took their time and definitely over delivered. The formula was unmatched and the flavors were even better. Needless to say, Ryse is all about doing what it takes to beat out the competition.

The Ryse of Functional Foods 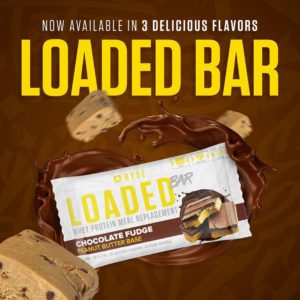 Amazing flavors, high quality ingredients, and a soft texture. What more could you want?

If there’s one category that has grown the most over the past few years in the sports supplement industry — it’s functional foods, which includes high-protein snacks such as bars, chips, and spreads. Many try to create the next best functional food, but the majority of what’s available is filled with ingredients you can barely pronounce.

No doubt, it’s challenging to make a cookie or brownie packed with 15-20g and only 4g of sugar while keeping the texture proper. When companies attempt to do this, they often taste terrible, become rock-hard within a month, or are full of low quality ingredients that may end up hurting your gut more than helping your muscle. For example, many protein bars are loaded with sugar alcohols to add sweetness without claiming actual sugar on the label. However, those can wreak havoc on your digestive system.

It’s also extremely common to see protein bars or snacks packed with 10g or more of “fake fibers” and that’s bound to be a recipe for disaster on your gut. Ryse demanded better: 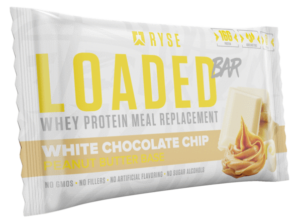 Each Loaded Bar has a dense peanut butter base packed with flavor and protein!

Fortunately, brands are starting to realize that there are ways to produce protein bars without sugar alcohols, fake fiber, or low-quality ingredients. Ryse Supps is one of those companies that’s decided to go against industry trends by creating a protein bar made with wholesome ingredients – – including peanut butter, whey protein isolate, mct oil, and sweet potato flour.

The Ryse Loaded Bar is more than just your standard “protein bar”, it’s a meal replacement bar, which is why it has a balanced macronutrient profile of protein, carbohydrates, and fats. Not to mention, the flavors will keep you coming back for more — good thing this is a guilt-free treat that you can feel good about eating!

Everything you need to know about the Ryse Loaded Bar is down below, along with our review. If you want to get an insane deal on Ryse supplements and keep up to date with their latest product and flavor releases — sign up for Ryse Supps news and deal alerts!

Keep in mind that Ryse Supps formulated this protein bar to be an adequate meal replacement, meaning it’s going to have a fair amount of carbs and fats to go along with the protein. This combination will help keep you fuller for longer and satisfy your cravings. 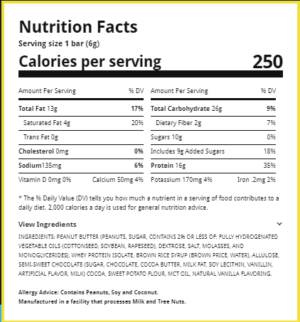 Here’s what one Ryse Loaded Bar contains (macros vary slightly depending on flavor):

Based on those numbers, we would say that the Ryse Loaded Protein Bar has a good ratio of protein, carbs, and fats, and at only 250 calories — it’s not going to blow your diet. Ryse Loaded Bar can help tie you over between meals or it can fuel your workouts by consuming it pre workout. With these macronutrients the options are endless and the ingredients and flavors are even better — kiss your sweet tooth goodbye.

Let’s jump into what the Ryse Loaded Bar is made of!

Ryse Supps prides themselves on creating a protein bar that’s made exclusively from whole foods and all natural ingredients. Each flavor is gluten-free and contains no GMOs, fillers, artificial flavors, “mislabeled fibers” (such as isomaltooligosaccharides (IMOs)), or sugar alcohols. 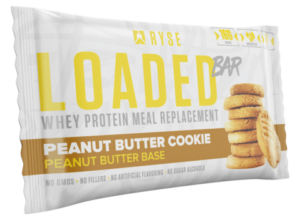 Gourmet flavors that will crush your sweet tooth!

Although the ingredients vary slightly from flavor to flavor, here’s what you’ll find in every Ryse Loaded Bar:

Beyond this list, there are some additional ingredients to add flavor and sweetness, but above is the foundation of every Ryse Loaded Bar. Of note are the allulose based chocolate — allulose is a sweet, sugar-like molecule that has no impact on blood sugar levels!

The only added protein source is whey protein isolate — an extremely high-quality protein that contains virtually no lactose, is 90% protein by weight, digest easily and rapidly, and is rich in all nine essential amino acids.

While the vast majority of other protein bars on the market are a blend of soy protein and dairy based protein, Ryse decided to only use the best source of protein on the market. Whey protein isolate would definitely be our top pick — so we’re glad to see that it’s delivering nearly the entire 16g of protein!

Meanwhile, additions such as peanut butter also add some protein as well.

The 13g of fat is mainly coming from peanut butter and mct oil, also known as medium chain triglyceride oil. Both of these ingredients are considered to be high quality sources of fat and unless you have a peanut allergy, should digest easily. Not to mention the combination of mct oil and peanut butter gives this bar a strong flavor and soft texture! 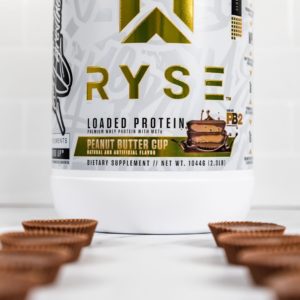 If you like the Loaded Bar, you’ll love Ryse Loaded Protein!

Lastly, the 26g of carbohydrate is primarily coming from brown rice syrup and sweet potato flour. Instead of using sugar alcohols, Ryse decided to add in brown rice syrup in order to deliver the sweetness that everyone is after. Brown rice syrup is a natural sweetener that’s produced by fermenting brown rice and breaking down its starches with various enzymes — what’s left is a liquid with a syrup consistency. It does contain sugar, which is why each bar has around 9g of added sugar.

The other carbohydrate in Ryse Loaded Bar is sweet potato flour, everyone knows that’s an incredible carbohydrate source. It digests slowly, contains a large amount of micronutrients, and packs a host of health benefits!

Overall this is a very solid bar for either a snack or meal replacement! Ryse Supps did a great job formulating the Loaded Bar and if you have kids who are picky eaters, this would be a great choice!

Before releasing the Loaded Bar, Ryse made sure that the flavors would crush your sweet tooth! For the big launch, Ryse released three decadent flavors that anyone would love — White Chocolate Chip, Peanut Butter Cookie, and Chocolate Fudge.

Because the Ryse Loaded Bar has a dense peanut butter base, expect to get a rich peanut butter flavor for each one. In the future, it would be cool to see almond butter instead of peanut butter for a flavor or two so that people with peanut allergies can enjoy the Loaded Bar too! Either way, they’ve done a great job flavoring the bar — especially with no sugar alcohols. 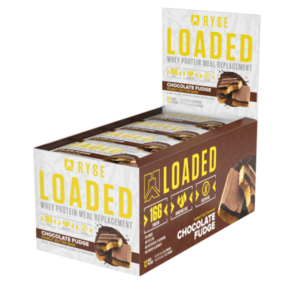 With every product launch, Ryse Supps sets out on a mission to raise the standards and the protein bar category is no different. Even though there are a few protein bars available that do use high quality ingredients… the majority of them cut corners and opt for using the cheapest ingredients possible. Next time you go to pick up a protein bar, flip the label around and don’t just look at the macronutrients — look at the ingredients! Also, note how the bar makes you and your gut feel after eating it, not just how it tastes.

Don’t be surprised if the protein bar has an ingredient list that’s a mile long, and ask yourself, “Am I eating a candy bar with protein, or a meal replacement bar?” We believe that you should be judging a protein bar based on quality, not quantity – and sometimes that means that less ingredients is more.

Ryse Supps proves that protein bars can be made using whole food based ingredients and still taste amazing. If you’re sick of buying protein bars that taste terrible or destroy your digestive system, then pick up Ryse Supps Loaded Bars — you won’t be disappointed. And if you want to save money on all Ryse supplements, subscribe down below!