Posted on September 5, 2019 by Mike Roberto | No Comments

Name recognition is worth quite a lot in the supplement industry, and as such, it’s a thing that’s relatively difficult to obtain. It takes years of putting out quality, effective products, each of which fulfill the needs and desires of consumers. 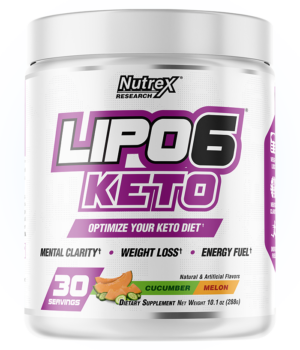 One name you’ve likely come to recognize is Nutrex Research. The brand has been dominating the industry since its inception, consistently formulating leading supplements praised by many. Their reputation as an industry leader is well-earned and has been garnered mainly through the quality of their products, as well as the brand’s forward-thinking mindset towards their product line!

Nutrex Lipo-6 Keto is exactly what is sounds like – a new member of the influential Lipo-6 family, but geared more towards low-carb dieters, especially those who are looking for some extra energy from ketone bodies. Lipo-6 is one of the top names in the fat-burning market, so any formula bearing its name comes with high expectations. Throw in the growing popularity of low-carb diets, and the bar is raised even higher. Lipo-6 Keto sets a high bar for itself, and based on its formula, it absolutely clears it!

Read on for more on Lipo-6 Keto, where we’ll break down all of the fun, fat-burning, even nootropic ingredients it uses to amplify fat-burning for low-carb dieters. Before we dive into it, however, make sure you subscribe to PricePlow for all the up-to-date deals, news, reviews, and interviews you could possibly want! 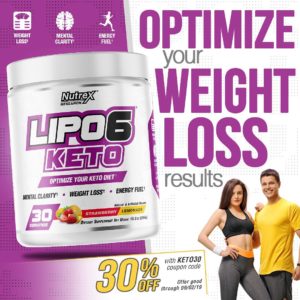 Going low-carb for the first time, especially with the aim of maintaining ketosis, can be quite daunting. Eating less carbohydrates (often the body’s primary energy source in this society), essentially forces the body to manufacture an alternative fuel source. On top of burning fat more efficiently, it also creates ketone bodies in the liver, which provide the uptick in energy levels[1] — once adapted!

However, but simply eating less carbohydrates is easier said than done for a lot of people. On top of that, once one enters ketosis, maintaining ketosis becomes incredibly important. Luckily, there are products out there than can help during the transition and when you want some extra energy hanging around for a workout. Further, many get enhanced cognition from them!

Lipo-6 Keto does just that – through its mix of ingredients, it packs the things perfect for keto dieters looking to enhance the effects of their ketogenic state. While it differs significantly from other Lipo-6 variations, its expertly geared towards low-carbers, with each ingredient serving an incredibly specific purpose.

As usual, Nutrex doesn’t cut any corners with this formula. It knows exactly what Lipo-6 Keto needs, and makes sure those ingredients are not only just present, but are properly dosed, as well! Let’s get into all the good stuff going on here.

In each scoop, of which you get 30 in each container, here’s what you’re getting:

Our one gripe – no potassium?!

With so much salt coming from this ingredient, we typically like to see some potassium to help balance things out. We already tend to get more than enough sodium in our diets, while usually coming up short on potassium intake. Consuming more salt further pushes this ratio out of whack, which is not ideal to keeping healthy.

So, be cognizant of your sodium intake, especially if you’re adding Lipo-6 Keto into your diet. Make sure you’re getting enough potassium, too – we’ll give you a great way to do that below when we talk about stacks, as Nutrex has another product that comes into play here!

Stacking – use Alpha Pump for a keto-friendly pre-workout stack!

While Lipo-6 Keto is designed to be, first and foremost, a dieting aid, there’s also opportunities to use it for other purposes! Sure, the ingredients here help amplify the effects of the keto diet, most of which are tied to staying lean. However, exercise is also crucial to keeping off extra pounds, which just happens to be another area where Lipo-6 Keto can be useful!

Alpha Pump is a new non-stimulant pre-workout label from Nutrex, and it’s loaded. It uses 5 incredibly innovative ingredients, such as PeakO2Ⓡ and GlycerSizeTM, to provide a unique, highly-stackable formula. In fact, its that last attribute that Nutrex seemed to be most proud of – this product could be combined with stimulant-based products, nootropics, and yes, even keto supplements!

Creating a stack of Alpha Pump and Lipo-6 Keto gets really interesting, really quickly! Before a workout, you can elevate the metabolism, your focus, and your alertness, while also inducing some vasodilating, endurance-focused gains!

That’s not it. Remember when we mentioned our slight disappointment of the lack of potassium in Lipo-6 Keto? Well, Alpha Pump supplies a greater dose of potassium than sodium, which is highly beneficial to balance out the sodium BHB salts in Lipo-6 Keto. This stack works in more ways than one, and we think you’ll be very happy if you give it a shot!

The brand’s avant-garde approach to their products has been on full display in 2019. Through new products, such as Alpha Pump discussed above, or new flavors, such as Sour Gummy Bear Outlift (their best flavor yet?!), or the industry-annihilating Nutrex Plant Protein. No doubt, this brand has kept us on our toes throughout much of 2019.

With numerous diet trends circulating in society these days, it can be rather difficult to identify one that not only generally works, but that works for you. We’re all wired differently, and have been dealt different hands from the deck of genetic playing cards. 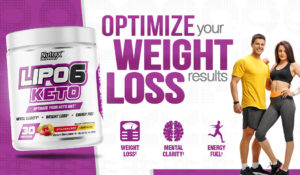 Nutrex keeps em coming. And check out those flavors!

The ketogenic diet, however, seems to be one of the better options out there – especially those who are hyperinsulinemic. Its benefits are real, it has science-supported evidence, and seems generally simple to follow for a large proportion of people once they figure it out and crush the carb addiction by leveraging protein, fat, and minerals (the latter provided in this supplement).

It was only a matter of time until a diet-centric brand jumped into the keto world. Based on the nootropic energy formula in Lipo-6 Keto, we’re glad they did!

Lipo-6 Keto does the Lipo-6 family proud, delivering the level of effectiveness typically tied to the line. Knowing that the keto diet is hailed for its fat-burning, brain-boosting capabilities, this product intensifies some of those benefits via high-quality ingredients at exceptional doses. Through a combination of BHB salts, nootropics, and caffeine, Lipo-6 Keto proves to be a great-feeling product for those looking to get the most out of their keto diet!