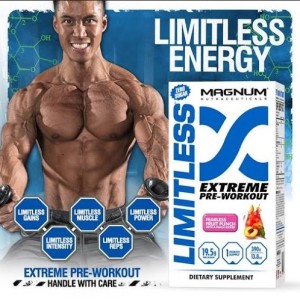 Limitless is the new pre-workout from Magnum, coming in June!

Several weeks ago, Magnum Nutraceuticals put the word out that they had a new pre-workout product in development. The product is aptly-named Limitless — and there’s a serious good feel to it.

The label is now out, and we have been able to get some more information from Magnum regarding a couple of key ingredients, so this page has been updated.

As you can guess, this is a focus-heavy pre workout supplement, based upon not only the pre-reviews below, but the name itself. But more on that in just a second… 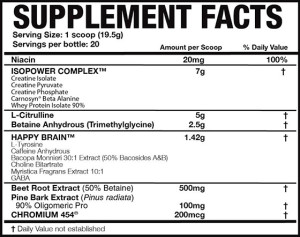 Limitless has a rather unique blend of ingredients designed to provide a unique and unparalleled sensory and focus experience.

Limitless promised a supplement that would be very focus-oriented, and boy does it appear that way! Unfortunately, Magnum Nutraceuticals is unwilling to disclose how much caffeine is inside, but we at least know enough to be comfortable to go full-bore with a whole scoop. More on that soon.

Let’s get right to it and see how it fares:

No caffeine disclosed? Here’s why… and a hint at what you have

This discussion came up on Magnum’s Facebook page, so we’ll quote it here:

I completely understand that the market is against proprietary blends right now, especially after all of the nitrogen spiking that a lot of brands chose to do. But put yourself in our shoes for one second, products like Limitless, which is a feel product, could be knocked off in a second by anyone who wanted to.

By only exposing some of our ingredients but keeping some proprietary, we protect ourselves from knockoffs for the immediate future and give consumers a chance to try Limitless and not an inferior knockoff. Eventually we may expose the whole label as we have done with other products like Opus. Once customers have tried our brand and we are in their mind and the market, we don’t mind exposing the breakdown and letting other companies knock us off. Just not right away.

Other products we’ve launched and are launching (like 3 more this summer) are 100% exposed supplement facts with no proprietary blends. So it really depends on what category the product is launched in when we determine whether to use proprietary blends or not.

Last but not least, even if a product exposes their whole ingredient list and amounts per ingredient, you the consumer still have to roll the dice and decide whether or not you trust that brand’s reputation and past actions. Crappy ingredients or false info on the Supp Facts isn’t all that uncommon.

Magnum has never nitrogen spiked and we have an amazing level of customer retention. People use Magnum and they come back and continue using it because it works. That’s not a position we are going to risk by using inferior raw materials or under dosing our products. — Magnum Nutraceuticals (on Facebook)

Good response, but a customer then asked to know at least beta alanine and caffeine, and got this from Markus Kaulius, the president of Magnum:

There is over 2g of Pharmaceutical Grade Beta Alanine – you will feel it more than 10g of non-Pharmaceutical Grade. Also, less than 250mg caffeine, but the accelerators make it feel like more – but with no jitters and no crash! Hope you enjoy! — Markus Kaulius, President, Magnum Nutraceuticals (via Facebook)

Based On A Not-So-True Story?

We’re assuming that intense focus is going to be what the ingredient lineup is going to be centered on, since the product’s name calls to mind the incredible 2011 movie starring Bradley Cooper.[2]

This will be Magnum’s first powdered pre-workout supplement since SERUM, though they do have the impressive Rocket Science pre-workout pill, and an “anabolic activator” named OPUS that focuses more on reducing muscle fatigue. Nootropic content in that one is limited to B vitamins for the most part — so it’s anyone’s guess as to what they’re going to dose Limitless with.

Whatever it is, it probably won’t give you instant kung fu powers, but if rumors are true, Limitless will provide for phenomenally driven workouts!

If you haven’t seen the entire movie, check it out — you’ll understand why we’re so excited about a pre workout supplement to share its name! 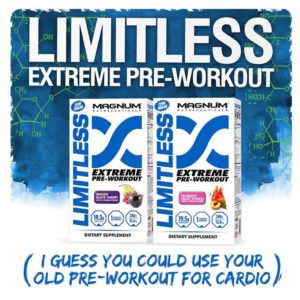 Black Cherry and Fruit Punch are the confirmed flavors … apparently one of them was very good!

Magnum has one beta tester review up so far on their Facebook page. Since it’s one of their own, naturally it’s a rave review full of superlatives, so take it with a grain of salt. But it does seem to confirm our theory that focus is the, er … focus of the product. Their beta tester reported steady and gradually climbing energy, no crash or lag, and long-lasting effects post-workout. They also raved about the flavor, though they forgot to mention which flavor it was![1]

Get in on the Pre-Release Contest!

Magnum is running a contest through their website, and the winners will get some free product sometime in early June. So hurry on over there and enter here — all you need to do is provide your email address!

Also, be sure and sign up for our product alerts below, as we’ll have the scoop on the ingredient list (possibly as soon as next week?) and an analysis when it becomes available!