Glaxon SuperShroom Levels Up Your Health And Recovery!

Get ready to 1up with SuperShroom from Glaxon!

The Goons over at Glaxon are always working hard in the supplement lab to develop new, innovative, and effective products. They may be a newer brand, but since Glaxon has several industry veterans on the team, their formulas reflect years of experience and research. 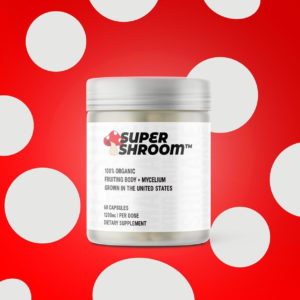 Experience the power of mushrooms with SuperShroom from Glaxon!

We told you that Glaxon would be the brand to watch in 2020, and they’re proving that with each product launch. So far some of their best sellers have been Specimen, a high-powered pre workout, Sedative, a lights-out sleep aid, and Super Greens, a greens powder that boosts health and performance. And just last month Glaxon released one of the best non-stim thermogenics we’ve seen yet, Thermal, which featured a cutting-edge ingredient in fat burning called MitoBurn from NNB Nutrition.

Glaxon has been getting several rave reviews and people are almost always caught off guard by how effective their products are. We constantly warn our followers and readers about Glaxon’s formulas being stronger than they look, however people don’t realize that until they actually give them a fair try.

There are several ingredients in Glaxon’s products that do very powerful things on their own, and we argue they could even be stand alone supplements. With this one, the Goons decided to do just that.

Glaxon has been making big strides over the past couple months to get their products in more people’s hands so they can better understand the method behind the formulations, proprietary blends, and ingredient selections. One of the ways they’re achieving this goal is by offering samples, which is fairly impressive since it can be quite costly, especially for a smaller brand.

In addition to that, Glaxon also just announced the release of their first stand-alone product, SuperShroom. If you’ve checked out our Super Greens blog post, then this name may sound familiar, because it’s one of the primary ingredients in that formula. 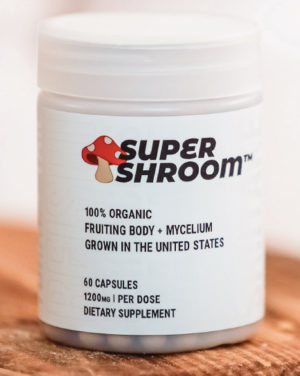 Get your daily dose of fungi for multiple benefits!

SuperShroom can technically be classified as one ingredient, however it actually features a blend of seven different types of mushrooms for maximal health, recovery, and immune boosting benefits. You may not think mushrooms are “super”, but believe us, SuperShroom will help you level up just like Mario and Luigi.

Glaxon knows exactly what it takes to formulate an extremely effective product, but they want you to understand the method behind their madness. That’s where the Supplement Lab YouTube channel and PricePlow come in to further educate you on what makes these formulas work on a physiological level. Glaxon prides themselves on offering supplements made with science, and we’re here to help explain that.

In this post, you’ll get a lesson covering all the benefits SuperShroomhas to offer, the appropriate way to take it in order to get the best results, and what makes them so super. But wait, just one more thing– in order to make sure you know everything the Glaxon Goons are up to, make sure to sign up for PricePlow’s Glaxon news and deal alerts!

Like we mentioned, there’s really only one ingredient to analyze in SuperShroom, but it’s seven different components really make it shine. This will be a great addition to your daily supplement stack and a more affordable option then a complete formula. Glaxon is doing everything they can to give you more options, and SuperShroom is a great start!

Here’s a quick overview of what SuperShroom is: 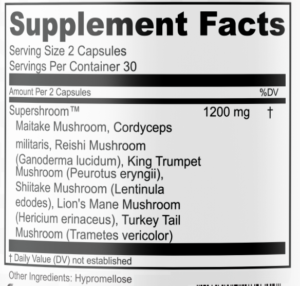 Mushrooms may sound simple, but they’re actually incredibly complex and researchers don’t fully understand how they operate. Mushrooms are technically classified as fungi, which have been living on this earth much longer than you or I. Even though there is still plenty to learn, research does point out some profound benefits from consuming an adequate amount of mushrooms for an extended period of time.

Consistency is Key with SuperShroom

Sure you may be getting enough fruits and veggies per day, but what about fungi? You might be missing out on some major health and performance gains by not consuming adequate amounts of fungi on a daily basis. Well, Glaxon gives you two options to fix that problem, either take SuperGreens, or if you want to save some money and just add the shrooms to your stack, SuperShroom will deliver!

This is one of the main reasons Glaxon made SuperShroom a stand alone product, because just like creatine or beta-alanine, daily consumption yields the best results. Therefore, Glaxon recommends taking 2-4 capsules per day for optimal benefits. It doesn’t really matter when you take it, just as long as you’re consistent!

Now that you know a bit about SuperShroom, let’s see what this nutrient powerhouse can do on a physiological level.

The Benefits of SuperShroom: What To Expect

Although each mushroom individually has its own unique effects, we’re mostly going to focus on what they do as a whole. There are a multitude of benefits from mushroom consumption, and we know most Goons don’t eat enough on a daily basis to see any kind of significant effects. That’s where supplementation fits into this puzzle.

Mushrooms have been shown to have various health boosting properties, including anti-inflammatory, antioxidant, anti-hypertensive, anti-viral, anti-microbial, anti-cancer, anti-diabetic, anti-obesity, liver protection, and cholesterol-lowering effects.[1] Mushrooms are very complex, but we’re going to simplify things by focusing on the main benefits you can expect to receive from SuperShroom. So let’s get right to it!

Do You Want To Know More About SuperShroom? Check Out This Video From The Supplement Lab!

Hit Your Daily Dose of Fungi With SuperShroom!

Fungi are very underrated and should be considered as their own food group. Mushrooms have been living on earth much longer than humans, and even with all the advancements in technology and research, we still don’t fully understand everything that they’re capable of. We’re excited to see more research conducted determining the effect of mushroom consumption on health and performance.

SuperShroom supercharges your health and performance!

These incredible fungi very well may be the next big thing in the sports supplement industry. We’re already starting to see them catch on in various products and don’t be surprised if more companies utilize them in the future. But as we mentioned, long term use seems to provide the most benefits, so if you give mushrooms a try at least use them daily for 4-6 weeks, before determining if they’re for you or not. Getting enough fungi in on a daily basis on top of fruits and veggies can be a difficult task from diet alone. Luckily, Glaxon has you covered with SuperShroom, and if you want an extra health boost, we highly recommend SuperGreens.

Glaxon is always looking for ways to expand their line of products, and we think this is a great start. Ever since Glaxon launched, they’ve been on a roll with new product and flavor releases, and who knows what Glaxon will release next. But we have a feeling you’re not going to want to miss out on all they have in store for the future. PricePlow will be here to make sure you stay up to date on any news, deals, reviews, or interviews from Glaxon and all you have to do is subscribe down below!