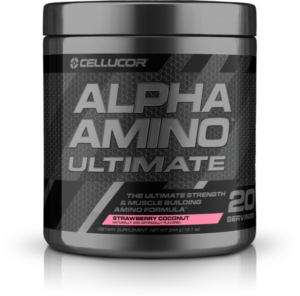 So you liked C4 Ultimate as much as we did? Then check out Alpha Amino Ultimate… where HMB has been added to your sports drink! But it’ll cost ya!

This is the sixth and newest addition to Cellucor’s Ultimate line of products, including the underrated-yet-pricey C4 Ultimate. We’re enjoying this series of aggressively-dosed supplements, as it’s taken the brand’s product line to a new level for those willing to spend on it.

With Alpha Amino Ultimate, Cellucor is promising its users a next level performance.

How Is This Different From the Original Alpha Amino?

Alpha Amino Ultimate is a new spin on the ‘regular’ Alpha Amino and offers notable and welcomed additions than its predecessor had, but both work from the same ingredient foundation.

For starters, Alpha Amino and Ultimate Alpha Amino both offer the same amino acid profiles, with both products containing the following:

On the surface, both products might look the same, but Alpha Amino Ultimate packs a few more perks that make it superior on a few different levels!

We discuss this new form of HMB and more below, but first let’s check the prices in the PricePlow retailers and let you sign up for alerts in case you want to get notified when the price drops, new coupons come out, or new flavors arrive:

Each tub of Alpha Amino Ultimate provides just twenty servings, but each serving is a fairly large 17.2g scoop. By most standards, you can tell right off the bat that you’re going to get a fair amount of ingredients just judging by the scoop size. 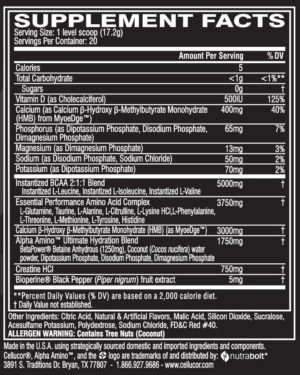 The Pros: 5g BCAA, good osmolyte and hydration support, and 3g HMB with Vitamin D! The cons: the six non-BCAA EAAs are absolutely buried and likely to be low-dosed.

Our label analysis starts with what Cellucor’s carrying over from the original Alpha Aminos (the BCAA Matrix, Essential Performance Amino Acids Complex, and the Hydration Blend). Then comes the fun stuff:

Alpha Amino Ultimate launched in three unique and fresh sounding flavors, but the full list is below:

This is a good flavor set to change things up – we’ve seen them all, but usually not from a brand as popular as Cellucor coming out of the gate with a new product. Note that Strawberry Coconut flavored supplements are sometimes known as Tiger’s Blood, although many brands add watermelon or a dash of citrus to flavors with that name. With summertime approaching at launch time here, these flavors will be a refreshing change-up from our typical intra-workout flavors.

Cellucor is dropping some great new supplements on us lately, but they no doubt come with a price tag to match. At $2.00/serving at launch, there are possibly some cheaper ways to get aminos, Vitamin D, and HMB, but then you’re going to be popping pills and pouring potions for a few minutes. 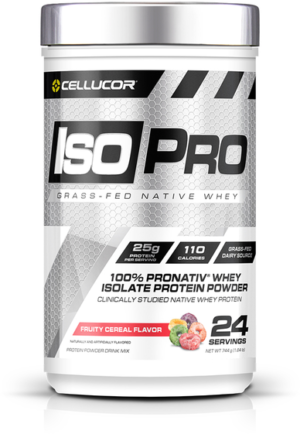 Nutrabolt has finally come out with a whey protein isolate in Cellucor Iso Pro… and it’s grass-fed whey. But does that make for better protein powder?

We’ve come to expect hydration elements, electrolytes, and aminos in our standard intra-workout powders, but adding HMB for gains and recovery and a small dose of Creatine HCl gives Alpha Amino Ultimate a little something something different, but with a top-shelf price to boot.

We’re cool with betaine and creatine being “underdosed” – those can be made up elsewhere, such as in a pre workout or your post workout shake. But what we’d really like to know is how much of the six other essential EAAs outside of the three BCAAs we’re getting, since “EAAs are the new BCAA“, yet the non-BCAA essentials buried deep in a proprietary blend here.

Either way, if you’re looking to try a new intra-workout supplement and have been interested in HMB, Alpha Amino Ultimate is certainly one way to get you there, and it should help you power through your next workout. It’s just almost definitely going to cost you a premium, just like C4 Ultimate. Whether that’s worth it to you really depends on how well you respond to the HMB idea.