Do you like working up a sweat when doing cardio or weight training? If so, then grab a towel and get ready to kick your perspiration system into high-gear, because this unique new supplement is just for you… and it isn’t using any stimulants to make it happen! 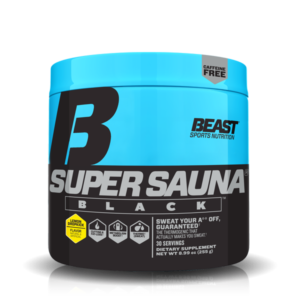 Beast Super Sauna has a couple of ingredients we love, and a new one that’s getting ‘hot’ lately… and it’s going to make you sweat!

Beast Sports Nutrition, best known for their famous Beast Mode and Beast Mode Black pre workout supplements, wanted a way to bring a thermogenic, metabolism-boosting, feel-good sweat. So they bringing the sauna to your supplement shelf:

Beast’s Super Sauna is a stimulant-free workout enhancer that claims you’ll “sweat your ass off”, and judging from its label and how it’s working for us so far… we have to say that they’re living up to those claims.

It’s powered by a ‘hot’ new ingredient (both literally and figuratively), gamma-butyrobetaine ethyl ester, and another spicy hot ingredient we’ve been raving about for years.

Before we bust into the details, you can get signed up for our Beast news alerts and price drops on their products:

With just a few ingredients, it should be simple to analyze now, right? Not necessarily, since one of them is quite new:

The Strongest Name in Sports Nutrition is staging a comeback. Are you on the Beast Bandwagon?

Truth be told, the reason we’re here, and the reason we started talking to Beast is because of this product and the GBB ingredient specifically. We have a few more Beast-based posts to come, now that we’re learning how the veteran brand is recharging its batteries and launching new products and materials, but it was a conversation about GBB, and thus Super Sauna Black, which started that entire discussion.

As a crew who has no problem sweating it out here in Texas, color us interested: 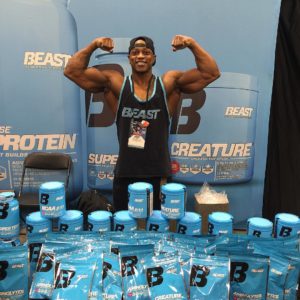 We interviewed champion bodybuilder Brandon Hendrickson at the 2018 Arnold here — this guy is a stud, and definitely way intense enough to put “Beast” on his shirt!

Super Suana Black comes in two flavors, both of which Team PricePlow has reviewed above:

Given that grains of paradise is a spice in its own right, you know this is going to have some punch, and that’s exactly what happened in our review.

Good news for those of you like us – the Sweet Heat flavor is using natural red beet root extract, and there is no added coloring to the Lemon Dropkick flavor. We appreciate this trend and hope more companies skip the Red #40’s and such – they’re completely unnecessary at this point, especially with a drink you’re going to chug before cardio.

Drink water while on this product!

It goes without saying, but the label stays, “Always try to consume at least 64 fl oz of water daily while using this product”.

Just because this is a “water loss” product doesn’t mean you aren’t supposed to drink water! Stay safe and keep performance high with hydration!

One thing we forgot to mention is how they like to stack this:

Super Sauna was designed to compliment our 2Shredded fat burner as another thermogenic without stimulants or to be used by itself as a thermo and water loss product.

Get the towel ready

We always hear about “thermogenic” this and that, but those products are usually based upon tons of stimulants and maybe some capsaicin from cayenne pepper extract. Capsaicin is still cool, but we long forecasted that grains of paradise would be the “next big thing” in terms of stimulant-free ingredients, and we stand by that. 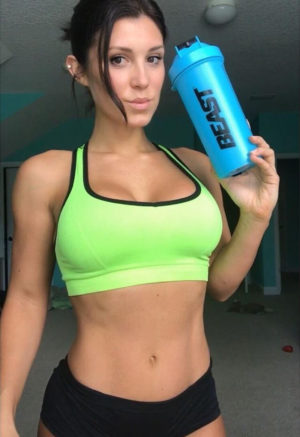 Beast Athlete @ericaealtman gets ready to get her sweat on with some Super Sauna! See all Beast products on our Beast Sports Nutrition page

We love products with the spice, but it was the GBB that really brought us here. We’re bummed that this is a proprietary blend, and that’s why our review is important — too much grains of paradise and you have too much spice and not enough sweat. But if this is formulated somewhere like 30mg/25mg/5mg grains/GBB/Bioperine, then we think it’ll be done right.

Realize that sweating isn’t necessary to have a good workout, but assuming that you’re well-hydrated and aren’t training in too much heat, we do like using sweat as a general indicator of activity – no citations on that though. If this gets us into that mode faster and helps us mobilize some fats while we’re at it, then all the better.

Beast is making a comeback, and they’re doing some wild stuff with this Black Series, as we’ll cover in a couple future posts. As fans of Beast Mode way back in the day, we’re excited to see what they’ll do, but we do believe that an open formula — including one that shows us extract standardizations — is clearly where the future is headed, and we hope they’ll take part in opening this formula up a bit more.

Now get your towel ready, because nobody wants you turning the gym’s bench into your own personal Super Sauna!