Beast Mode PUMP is Here! What to Expect from TGC’s Newest Beast Supplement

The next supplement in the Beast / Guerrilla Chemist collab is here, and it’s a potent non-stim pump product! 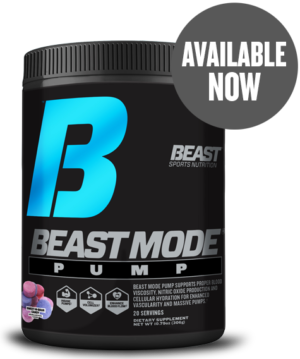 Beast Mode Pump has arrived! And this non-stimulant pre workout does not disappoint!

In early 2019, Beast Sports Nutrition, one of the industry’s most recognizable and prominent brands, announced a partnership that possessed incredible potential. The brand was teaming up with The Guerrilla Chemist (TGC), one of the industry’s most innovative independent formulators, to help create a new line of supplements. Given the reputation of the two parties, we were ready to rock and roll right from the start. So far, they haven’t disappointed.

After following through on the relationship’s potential with two powerful products, Neuro Beast and Super Test Max, the team has decided to collaborate once again. This time, TGC is tapping into his knowledge of non-stimulant ingredients. Beast Mode Pump is the latest release in the impressive collaboration, and it has some interesting ingredients we have never seen in this type of product!

We’re excited to announce Beast Mode Pump is now available and in this post we are going to break down all the ingredients so you know exactly why they are included! Before we take a deep dive on this product’s formula, make sure you’re subscribed to PricePlow so you get the best deals and latest supplement industry news!

This is a very potent pump product, therefore it makes sense for the label to list dosages for both a 1/2 scoop or full scoop depending on your preference! In this analysis we’re going to look at what a full serving (15.3) delivers to give you a massive pump!

As you can see, this label has science-backed ingredients at clinical, efficacious dosages. This is a trademark of TGC, a true homage to the research-based education he acquired while earning a Master’s Degree in Organic and Biochemistry from the University of Central Florida. Each product he gets his hands on is sure have top-notch ingredients at the dosages in which we like to see them. This approach was used in the creation of both Neuro Beast and Super Test Max, so we’d expect the same here!

TGC has definitely helped formulate some crazy non-stim pump formulas before. While he of course has an affinity for common pump ingredients like citrulline and glycerol, he’s also introduced some of the industry’s more innovative ingredients.

Below is an up-to-date list of the known flavors:

Next in the Beast Mode “Platform”

It only makes sense to capitalize on such an incredible name like Beast Mode, the name of their original pre workout. A few years back, they expanded with the ultra high-stim energy power, Beast Mode Black. Beast Mode Pump will play a perfect partner to its high-energy counterpart! 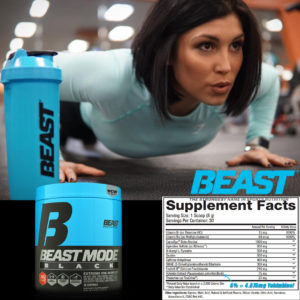 With Beast Mode Black, we got Beast to release their yohimbe dose, which definitely brings some thunder!

We’ve been a fan of both Beast and The Guerrilla Chemist for some time now, so when the two decided to team up, we were ecstatic – this collab has endless potential. Their first two releases, Neuro Beast and Super Test Max, simply blew us away (nearly too much in the case of a full 3 capsule serving of Neuro Beast!) – we loved both of the effective, well-dosed, and high-quality formulas.

Inside, there are eight ingredients, including one that’s rarely used in a stim-free pre workout supplement to the best of our knowledge.

Beast Mode Pump is the latest iteration in the fruitful partnership, and if the past is any indication, it’ll be as impressive as the rest of the line. Promising insane pumps through a concoction of the industry’s top ingredients, this product is going to be special.