Our main goal here on the PricePlow blog is providing you with the latest supplement news and product breakdowns. On top of that, we also keep an eye out for up-and-coming brands that may not be featured yet at your local supplement shop to let you know who might be bringing the next wave of great products to the market.

Today, it’s time to gather everyone on the East Coast – we’ve got a brand specifically for the hardcore athlete who openly embraces heavy lifting, hard work, as well as heavy hitting. Apollon Nutrition is a hardcore athlete’s brand that’s born out of one of the most storied gyms in America.

We’ve got plenty more info to come on Apollon Nutrition, but before we get there, you can check their website at ApollonNutrition.com and see what PricePlow stores and coupons have them below:

Who is Apollon Nutrition? Apollon Nutrition was born in Edison, NJ out of Apollon Gym, one of the top 10 hardcore gyms in America and was even featured on Bodybuilding.com in 2009 as Best Gym in the country! Apollon Gym has been around since 1975, when a young Rich Gaspari was making his way in the bodybuilding world. Over the years, Apollon Gym has seen the likes of some of the premier athletes around the world train there including:

Apollon Nutrition was established in January 2015 out of necessity. Gym members were clamoring for heavy hitting, yet effective products, but they couldn’t find them anywhere. Robert Samborsky launched the brand with the sole intent of providing high quality, fully transparent products to his gym members, but the products caught on with many of the fighters that train at Apollon Gym, and from there the brand has experienced tremendous growth in the hardcore training circles.

”This is why Apollon Nutrition was created. It wasn’t for fame or fortune like many of today’s “personality” brands. It wasn’t created to end up in big store chains which care more about commissions than doing what’s right for the customers. Apollon Nutrition was built for the members of Apollon Gym and they never expected the brand to start getting attention outside of the walls of their gym.

However, it did. Word of mouth spread about the tiny brand because the formulas were just that good. When something is great, it doesn’t need a lot of marketing. It doesn’t require a big ad budget to get attention. People who bust their asses in the gym exist all over the world and they demand more. That’s why Apollon Nutrition is fast becoming a household name among hardcore gym rats. The people want more. They want Apollon Nutrition.”

Who is Apollon Nutrition for?

As you could probably guess from the introduction, Apollon is for the serious hardcore athlete and lifter out there. It doesn’t matter if you’re a bodybuilder, powerlifter, strongman, or crossfitter — if you’re interested in peak performance and pushing the limits of your genetics, Apollon Nutrition is a brand you must check out.

Typically, male athletes would be predominantly drawn to a brand of this sorts, but Apollon also appeals to women as well. Basically, if you’re up to snuff on how supplements work, and want them dosed properly, it’s worth the time investment to give them a look.

A lot of companies these days are touting fully transparent labels that clearly identify all of the active ingredients in their supplements such as creatine, caffeine, beta alanine, etc. That’s not enough for the guys at Apollon Nutrition.

They’ve upped the ante and joined the ranks of the few that have embraced full disclosure labels. Not only do they list all of the active ingredients, but also all of the inactive ones as well. Each product clearly states how much sweetener, flavoring, and natural coloring is used in each tub, so you know exactly what you’re putting in your body at all times. As an added bonus, Apollon uses no artificial colors in their products too!

Where to Find Apollon Nutrition Products?

Apollon has just shifted from gym-only sales to selling to the wider internet market. As such, they are primarily a direct to customer brand with a few select brick and mortar stores with hardcore clientele. We’ve found them on Amazon, and they should be starting to expand available outlets soon! 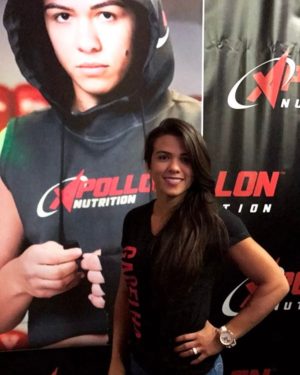 Being extremely popular with combat sport athletes, it should come as no surprise that Apollon has a long list of talent from local NPC ATHLETES to stars in the world of MMA, Muay Thai, Strongman, and Powerlifting. Here’s just a few of their notable athletes you’ll see touting the brand:

Want to try before you buy? Stay tuned to our Free Supplement Samples page – Apollon plans on joining so that you can make your buying decision easier, so check that page for their free samples!

Apollon Nutrition isn’t playing any games with their products. They have a very select niche of the market they cater to, and they chase it with reckless abandon. Their products may not be for the average soccer mom walking into a big box store, but for the heavy lifting, fast kicking, hardcore athlete out there, Apollon Nutrition is a can’t miss.

We’ll be putting their 600mg pre workout Hooligan through the paces here shortly, stay tuned to see the crew’s reaction!