Regardless of the type of training you practice – there’s one thing you likely emphasize over all else: growing better and stronger! In order to do that, recovery must be given a huge amount of attention. Recovering from tough training session isn’t always as easy as we’d like, but there’s one thing that controls how well your muscles rebuild – quality protein!

Almost everyone has used a protein powder at some point in their lives, and most major supplement companies have a line for this muscle-building necessity. If you exercise, and hope to reap the full benefits of your training, make no mistake about it – having a solid protein powder in your life makes things a whole lot easier!

There are a ton of different proteins to choose from – from clean and pure to dirty and candy-filled. But there’s a new class of proteins out there: those that push the limits in new directions — with advanced absorption and muscle protein synthesis amplifiers! 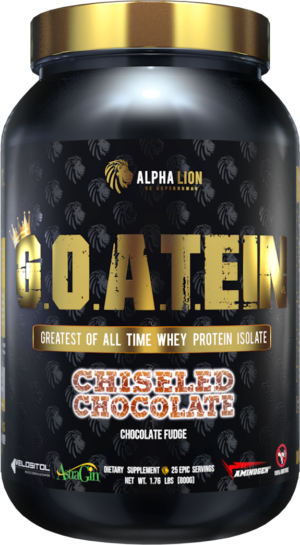 The SuperHuman Brand Goes Protein – in a BIG way!

The brand behind the legendary SuperHuman pre workout supplement, Alpha Lion, has a ton of unique supplements, but not a protein. At this stage, with so many potent releases, they can’t just put out a plain protein powder. So they’re going BIG, with one they’re claiming to be the greatest of all time, or G.O.A.T. So much so that it’s right in the name.

We’re excited to introduce you to Alpha Lion G.O.A.T.EIN, a highly advanced — and extremely effective — whey protein isolate that’s packed with a ton of extras. Unlike other powders out there, G.O.A.TEIN packs more than just protein, separating itself from the competition and moving into the conversation for the most powerful protein powder label we’ve seen, full stop!

In this post, we’ll unload on all you need to know about this monster of an isolate – the protein sources, macros, and all of the extra fun stuff Alpha Lion sprinkled in! Before we get into that, however, make sure you’re subscribed to PricePlow so you can stay up-to-date with our Alpha Lion news, reviews, and giveaways:

G.O.A.T.EIN – Built with the 4 Pillars of Greatness

Most protein powders, whether they’re isolates, concentrates, or even blends, really only have one core ingredient – protein. That’s not necessarily a bad thing – we’d take issue with a protein powder that lacked a significant amount of protein! But it also means that most powders are pretty similar, and they usually don’t look to provide additional benefits. 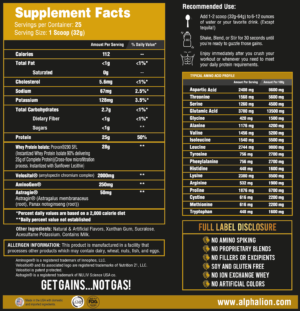 Built Upon the Four Pillars of Greatness, G.O.A.TEIN is no standard whey protein isolate here!

Alpha Lion bucks that trend with G.O.A.T.EIN, which uses its self-dubbed “4 Pillars of Greatness“ to stake its claim in the G.O.A.T. discussion! Each of these are described in detail below, but here’s the quick list:

Now let’s dig deeper into just what elevates this protein powder from the others! 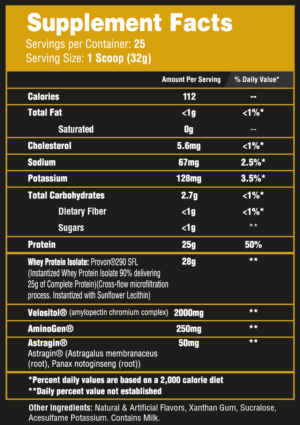 Let’s take a look at that label again

While the macronutrients may vary slightly from flavor to flavor, they’re relatively consistent across the board. In each 32g scoop of G.O.A.T.EIN, here’s what you can expect:

Again, WPIs tend to have a great macronutrient profile, allowing a lot of flexibility in terms of fitting it in one’s diet. Coming in with barely any fat or carbs, with less than 1g of sugar, G.O.A.T.EIN surely has the nutrition to warrant a claim for the best protein powder there is!

Alpha Lion spends a ton of their energy optimizing their formulas, but that doesn’t mean they stop there! No, these guys are always sure to perfect their flavors, consistently putting out some of the best flavors in the industry, regardless of the type of product!

Here are the awesome, G.O.A.T.-worthy flavors you can find this muscle-building WPI powder in:

Coming out of the gate and claiming to be the best protein in the game (and right there in the name no less) is absolutely a daring claim. With so many options on the market, you really need to separate from the pack in order to back up that statement. That being said, this isn’t the first time Alpha Lion has exuded this level of confidence – they rarely ever knock on a door before entering, they kick the door down! 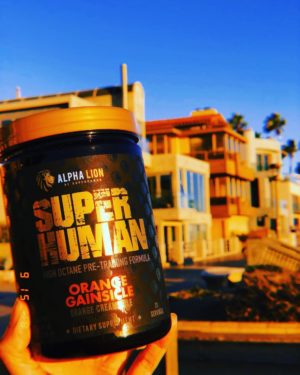 Feeling Super Human? Get on the Orange Gainsicle!

We’ve seen this confident abruptness from these guys in the past. Their pre-workout formula, SuperHuman, aims to power your workouts so intensely that you feel like you’re training to star in the next superhero cinematic blockbuster. If that formula isn’t strong enough for you, perhaps their SuperHuman Supreme would do the trick! With flavors like “Hulk Juice” or stars-and-stripes themed “Patriotic Pineapple”, clearly Alpha Lion isn’t afraid to make a statement!

Given their history, we shouldn’t be surprised when we see that they’ve named their whey protein isolate G.O.A.T.EIN. Alpha Lion knows how well-formulated their products are, and they rightfully think highly of them. Their confidence shines through in their branding and marketing, and they never back down from a challenge. These guys are pretty consistent, as well, even when it comes to their own name – wouldn’t you expect a lion to reign supreme over the rest of the pack?

Conclusion: Alpha Lion continues their contention for king of the jungle! 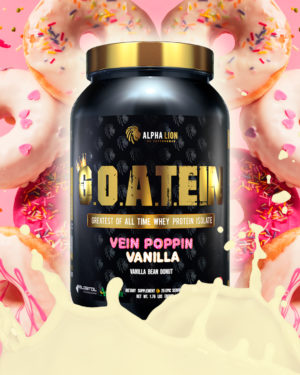 Vein-Poppin’ Vanilla… no vasodilators inside (that’s what Komodo Pump is for!)

These days, debates about “the greatest of all time” rage throughout society. People will go on for days about who the best brand or basketball player ever is – heck, you’ll even have people take strong stances on what the greatest ice cream flavor of all time is!

The discourse around what the top protein powder out there is will likely rage on for all eternity, however, that doesn’t mean a company can’t hit us with a product that makes the conversation much more interesting! In G.O.A.T.EIN from Alpha Lion, we’re not just getting a super-pure whey protein isolate, no way. On top of a quality, fast-digesting, virtually lactose-free form of whey, we’re receiving key muscle-building facilitators – the stuff you need to ensure all 25g of protein is being put to maximum use!

Lions are often regarded as the king of the jungle, holding the top spot among all the other animals. A “G.O.A.T.” is held in a similar light, reigning supreme over all else in whichever category it’s being discussed in. Alpha Lion is no stranger to staking their claim as top dog, and in G.O.A.T.EIN, they’ve released a serious contender for the greatest whey isolate you can get your hands (or paws) on!