Bill to Make Selling SARMs ILLEGAL Proposed in the Senate 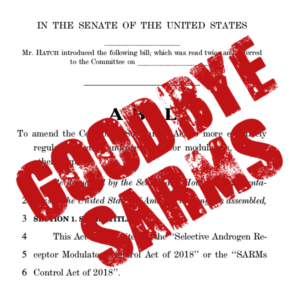 Last November, we wrote that SARMS were on the ropes after the FDA sent warning letters. This week Utah Senator Orrin Hatch introduced a bill that would make a SARMS ban official — and it’d be enforced by the DEA, guns-a-blazin’ and all.

Also known as the Selective Androgen Receptor Modulators Control Act of 2018, this bill, if enacted by Congress and signed by President Trump, would amend the Controlled Substances Act to “more effectively regulate selective androgen receptor modulators”, putting enforcement in the hands of the Drug Enforcement Agency.

The law was introduced on April 24, 2018, but at the time of press, is not currently publicly available. However, we’ve procured the first version below — just note that the bill can and will be changed, and you should track the latest version with the GovTrack.us link once it is live:

Orrin Hatch (R-UT) received partisan support from Sheldon Whitehouse (D-RI) for the bill. Hatch, who could be considered the “godfather” of the dietary supplement industry since he originally drafted and passed 1994 DSHEA, saving the industry from the drug trade, had this to say:

“SARMs are synthetic drugs that have negative effects similar to those of anabolic steroids,” Hatch said. “Even though SARMS are not approved by the FDA for human use and pose the same safety risks as anabolic steroids, they have proliferated under a regime in which they are not subject to the same controls. The SARMs Control Act closes this loophole to ensure that the DEA has the authority it needs to prevent abuse and diversion of these dangerous substances.”[1]

The PDF is only 11 pages long, so if you’re interested in this space, it’s well worth reading. Especially since there are a few questions looming:

Potential verbiage issues with the bill

Mark Glazier of NutraBio, a brand that most definitely does not sell nor manufacture SARMs, went on the record with some concerns regarding the bill.[2]

Learn more in our interview with Mark Glazier, as he broke the news to us:

The issue he did not like is on the 4th page, where it allows for other substances that promote muscle growth to be added:

7 … shall be considered to be a SARM for purposes of
8 this title if the drug or other substance—
9 ‘‘(I) has been created or manufactured with the
10 intent of producing a drug or other substance that—
11 ‘‘(aa) promotes muscle growth; or
12 ‘‘(bb) otherwise causes a pharmacological
13 effect similar to that of testosterone; or

This type of wording, with misplaced ‘or’s could open the industry up to a new series of litigation on non-SARM muscle-building ingredients, all of which can be avoided by tightening up the verbiage in future drafts.

As discussed in the video with Mark and Mike above, Orrin Hatch is retiring (there has been a large storm of Congressional retirements for 2018), which could mean long-term changes for the dietary supplement industry, since Hatch is highly senior and has been very protective and supportive of his “creation”. This may be subject for another blog post.

The Good News is that the Bill was introduced by Senator Hatch, who has been the Dietary Supplement Industry’s best advocate for decades. He has worked tirelessly to protect consumers and our industry. He, along with Senator Durbin saved the industry from complete demise back in 1994 when they passed the DSHEA Act which prevented the FDA from following through with its plan of categorizing all dietary supplements as DRUGS. The Bill will go through much debate as it moves forward we will be there watching each step of the way. I have confidence in Senator Hatch that if or when the final Bill is enacted, it will protect both consume’s health and their access to safe dietary supplements.

Regardless of the Hatch situation, you can rest assured that very few politicians would ever vote no on a “steroid law”, so officially consider all SARMs as good as dead – it’s only a matter of when.