Anyone who’s ever done a triathlon, marathon, or merely entered a sporting good store has definitely seen those “goos” and “energy gels” that come in disposable packets. Meant for carbohydrate-fueled athletes on the run (literally), they can be used during training or competition to increase some quick glycolytic energy.

But over the past five years, we’ve seen an explosive wave of low-carb and ultra-low carb athletes, many who are primarily fat- and ketone-fueled, and perhaps only using carbohydrates sparingly for pre workout energy or recovery.

These athletes and dieters who are looking to burn their own fat do not want to take carbohydrates before or during training because carbohydrates will temporarily displace fat oxidation,[1] as the body is primarily forced to handle the carbs before getting back to burning fat. As such, there is no place for those cheap maltodextrin-based “goos” and “energy gels” for the average low-carb dieter.

This presented an opportunity. And Nutrex Research seized it.

The idea is simple: Nutrex took those carbohydrate gels, swapped out the carbs for high-quality MCT oil, avocado oil, some supporting ingredients like choline and carnitine, and tossed 25mg caffeine in for good measure.

What’s left are their new Lipo-6 Keto goFAT® Gels, which are energy for low-carb athletes, touting 35 calories, 30 of which are from fat. There’s just one net carb, and the flavors are phenomenal, making for more than just athletic gels, but on-the-go energy or a craving-curbing sweet-tooth satisfying “dessert”.

Our breakdown is below, but first check out PricePlow’s coupon-powered Lipo-6 goFAT Gel prices and sign up for Nutrex Alerts, especially if you’re into this kind of stuff, because we have a feeling they’re only getting started (after the recent Lipo-6 Keto powder):

Since the MCT and Avocado are the obvious stars of the show, this article will focus on those:

On first thought, most will look at these for athletic purposes, since they’re modeled after the carbohydrate-based energy gels and “goos” that are used during races and practices. That’s definitely valid, especially if you feel a bonk coming and don’t feel that you’re re-generating glycogen quickly enough (energy generation from carbs is definitely faster than generation from fats). Once the “tank is empty”, MCT is an ultra-quick energy source that is not a carb, a salty BHB salt (although that cucumber melon flavor of Lipo-6 Keto powder is awesome) or alcoholic-tasting ketone ester.

However, thanks to the great taste, these can be used in a pinch to satisfy a sweet tooth in a “moment of crisis”, such as when desserts are presented. 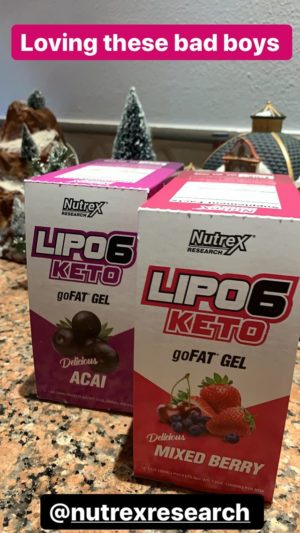 Incredibly enjoyable treats, if you have a sweet tooth, this may be all it takes to satisfy it!

They’re also great to have in the car, in the case that your fast goes too long, you’re feeling ravenous, but are somewhere without presentable high-protein, low-carb options. MCTs have appetite suppressing capabilities for some users, and this may just hit the spot and get you over the hump until you have a real meal.

And anytime you’re feeling like 25mg caffeine, they’re nice, although that’s an extremely expensive way of ingesting caffeine. It’s all about the MCT.

So far, it’s tough to pinpoint the best one. They’re both extremely good, but Acai may be the current winner.

It’s actually quite surprising that nobody else has thought of this (or executed it), after four years of meteoric rise of these ultra low carb diets. Nutrex may have been a bit late to the game, but they’ve already innovated more than most of the “me too” companies in this space have, which is promising for the future, because we have a feeling there’s more to come.

At the end of the day, it’s a flavorful shot of MCT with a dash of caffeine, and both of these have great purposes for low-carb dieters. It may seem silly to anyone using carbs, but once dieters get a feel for the focused and clean energy effects from ketone bodies, they often start tinkering with ways to generate more, and this is a great way to get them.

Stay tuned to our Nutrex alerts, we have a feeling that there’s more of this kind of stuff coming: