Are Blue Zones Based Upon FRAUD? New Research May Suggest…

Imagine this. You were born in 1925 in a rural area in Italy and have no birth certificate. It’s now 1965, so you’re 40 years old. You know that pensions are given to those who are 60 or older. You’re poor, uneducated, and have just about nothing to lose.

Knowing that you don’t really exist on paper, you submit pension paperwork stating you were born in 1905. What’s the worst that can happen? 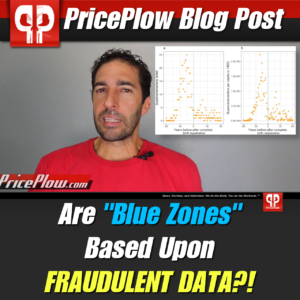 Yikes! Are the Blue Zones really based upon bad (or even fraudulent) birth reporting?! New research investigates

Voila, with no sure reason not to believe you, and no scientific way to prove otherwise, you’re approved for that pension. Congratulations on your retirement – you’re now in the federal system… with a date of birth in 1905!

All goes well for decades, mooching off of the system like a leech. But then in 2005, some researchers come sniffing around and are impressed by this data. “Wow, so many people over 100 years old”, they exclaim! They publish a book on the other half of the world, and everyone who reads it is impressed that you can live so long in these areas despite all of the smoking, illiteracy, and low-quality plant-based diets.

But then something odd happens. We fast forward to 2015… and you’re still alive! As are many others just like you! You’re now 110 years old! How is that possible?!

Well, it’s possible because you’re really a 90 year old lying, cheating, fraud. And so is the data that’s driven a decade’s worth of dietary decisions for thousands of unsuspecting people.

Don’t think it’s possible? Then we’ve got a book to sell you!

Did this Really Happen? New Research Deems it More than Possible…

The background: In recent years, scientists have dedicated exuberant amounts of time and resources studying Blue Zones – areas on Earth which, according to author Dan Buettner, promote increased longevity. Sardinia, Okinawa, and Ikaria are the most commonly cited Blue Zones. It’s no secret that most humans want to live longer, and understanding how factors such as genetics, living conditions, diet and other lifestyle choices impact longevity is crucial in order to achieve that reality.

The book titled Blue Zones was published in 2008, with a subtitle of Lessons for Living Longer From the People Who’ve Lived the Longest. But since that time, something odd has happened — several of those who were over 100 years old at the time still aren’t dying – beyond the statistical odds!

Are we dealing with some superhuman beings, or is something else going on here?

How in the world are so many people living to be 110 or older?!

The number of those who live past 110 years old, referred to as “supercentenarians”, would normally be a clear indicator of human longevity, warranting attention and research from those interested in the science of living longer. However, recent statistical research conducted at the Australian National University suggests that there may be some alarming errors made in reporting supercentenarian status,[1] thus bringing the validity of Blue Zones into question.

Using data from the United States and Italy, the statisticians found many anomalies, leading to the questioning of the longevity claims derived from the Blue Zones. Below are some key points:

Without foolproof methods verifying one’s true age, we simply can’t put too much faith into the accurate number of supercentenarians out there! Time will fix this, but for now, it’s simply dirty data.

With severe health factors such as smoking and crime rates being curiously high in these areas, as well as a lack of adequate education available, it makes you really wonder just how these individuals are living so long. Chances are, they aren’t. They were just dodging war or have been collecting pension checks for an extra decade or two.

The biggest visual indicator that something is clearly amiss is below: 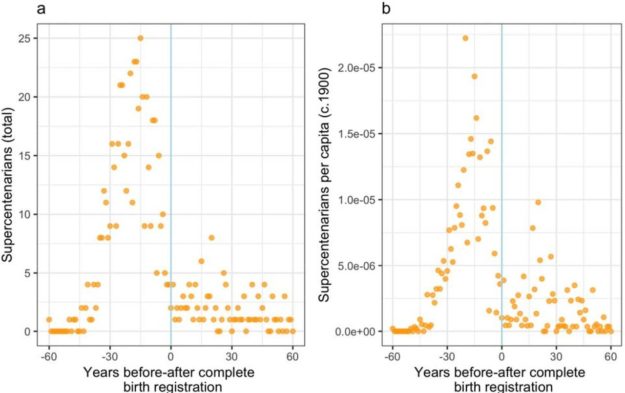 Well look at that! Once you start requiring birth certificates, there’s a whole lot less people living to 110!

Once birth certificates became mandatory… far fewer supercentenarians! Tougher to lie about your age when you’re already in the system like the rest of us!

Why do we care?

The reason this is important is because these Blue Zones are often cited as healthy areas because of these “longevity statistics”, especially from plant-based diet advocates who make health claims based upon that data. But if that data’s unclean, perhaps we shouldn’t be modeling our diets as much.

Disclaimer: The data is likely rife with input fraud, not the book or author.

Realize that we’re not calling the book Blue Zones a fraud, nor are we criticizing Buettner (although we definitely hope for a response and even a retraction from him). We’re simply considering that the book is based upon low-quality data, and any claims therein should be taken with a grain of salt.

The fountain of youth evades us still

This research poses some fascinating questions regarding Blue Zones. These areas, which are touted for characteristics that are allegedly conducive to living longer, may not be the Fountain of Youth many originally had hoped.

Humans want to live longer – that’s entirely understandable. Given the scientific resources we have at our disposal, as well as potential advances that may arrive in the near future, longer lives would seem inevitable. 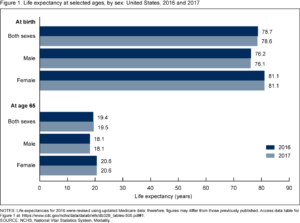 As of 2017, American Life Expectancy is on the decline! Despite medical advances, what we’re doing is not working for us. Time to reconsider our diets.

There was once a time when practically nobody was dying of cancer and heart disease. Metabolic syndrome and obesity were unheard of, and nobody was getting their feet amputated because they couldn’t stop eating carbohydrates and refried soybean oil. It was a time before smoking, and a time well before the ultra-processed food we face every day.

Now that we’re wise to the effects of smoking and we’ve mastered the historical killers of infectious disease through sanitation and antibiotics, it’s time we brought back the ancestral and culturally-appropriate food from centuries ago, but bring our medical technology along with it.

A marriage of two incredible worlds, led by animal-sourced food, local seasonal plants, limited sugar, quality sleep, and a return to breastfeeding and family/community values… while leaving the processed garbage in the dump where it belongs.

That is the future of longevity, and it’s never too late to join the tribe and become human again.

Oh, and while we’re at it, remember Jeanne Calment, the French woman claimed to be the oldest documented human, dying at 122 years old? Yeah… it turns out she’s possibly a fraud as well, now accused of assuming her dead mother’s identity in 1934 in order to avoid inheritance tax.[3] But we’ll save that for another article.