The 5:2 Diet: Fasting Pilot Study Shows Promise, But Has Drawbacks

Would you be interested in a job that required two days of work and five days off per week? How about a diet that only requires you to “diet” two days a week allowing you to take it easy the remaining five? Not a bad deal right? 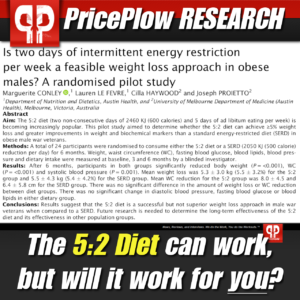 The 5:2 Diet had similar results and adherence as a standard calorie-restricted diet… but could it be more enjoyable?

The 5:2 diet does exactly that. In place of traditional everyday calorie restriction the 5:2 diet requires dieters to consume extremely low calories two non-consecutive days per week with no restriction on the remaining five days. Marguerite Conley and colleagues from the University of Melbourne Department of Medicine in partnership with the Department of Nutrition and Dietetics in Australia studied the 5:2 diet and published their study titled: “Is two days of intermittent energy restriction per week a feasible weight loss approach in obese males? A randomized pilot study.”[1]The results show the 5:2 strategy is a viable option!

Traditional diets emphasize caloric restriction in order to induce weight loss. Eat less than you burn and you lose weight. Spend more than you save and the bodyfat savings account will shrink. We know these diets work[2-10] but they typically require restricting food intake on a daily basis.All one has to do is look around to see that we live in a day and age where many of us prefer not to be restricted for long, or simply can’t adhere to it. The number of Americans who are considered obese has doubled from 1980 to 2000.[11] The weight gain is hardly a problem unique to the United States:

With obesity a major health concern of our society, what has all our dieting effort and options gotten us? According to researchers at UCLA who have analyzed 31 long-term weight loss studies:

“You can initially lose five to 10 percent of your weight on any number of diets, but then the weight comes back… We found that the majority of people regained all the weight, plus more.”[11]

The need for a successful approach to a healthy weight is clearly required now more than ever. The long term failure rate with diets may be strongly linked with the fact that most choose a diet they cannot follow FOR LIFE. The daily restriction required with many diets runs contrary to something the average individual is willing to endure indefinitely. Either their metabolism slows to the point of no more weight loss, or they eventually cave and gain it all back in relatively fast fashion.

Daily caloric restriction is simply poorly suited as a lifestyle of eating. Enter the 5:2 Diet. 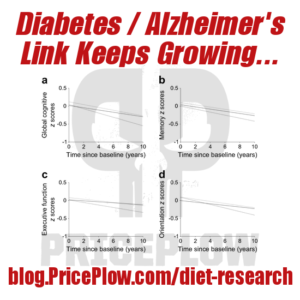 RELATED: Does a higher-carb diet contribute (or even cause) diabetes? A recent longitudinal study using English data showed that higher blood sugar just might, adding to the evidence that questions why non-athletes should eat so many carbs, and whether intermittent fasting can help prevent it once you understand the current theory.

24 male war veteran participants were randomly divided into two groups. One group followed the standard energy-reduced diet (“SERD”), in which calories were reduced from the average intake — 500 — seven days a week. The actual food consumed by the SERD group was based on the Australian Guide to Healthy Eating.[1] The second group followed the 5:2 Diet, referred to as intermittent energy restriction, or “IER“. The IER group consumed 600 calories per day on two non-consecutive days while eating ad libitum (no restriction) the remaining five.

As you can see, both groups experienced a decrease in weight, waist circumference, and systolic blood pressure! No significant change was observed in diastolic blood pressure, fasting blood glucose, total cholesterol, LDL, and HDL cholesterol, and triglycerides. Interestingly the 5:2 group saw a greater decrease, albeit a small difference, in waist circumference. Perhaps the two days of borderline fasting went a little further towards shrinking the waistline due to decreased volume of consumption.

Would long-term adoption of 5:2 as a lifestyle result in a tighter waistline and enjoyable lifestyle? Perhaps!

So both diets work for at least six months with the majority of change and improvements coming during the first three. The human body adapts and clearly, at about the three-month point, one should re-evaluate and adjust consumption accordingly to continue to see results if so desired.

The 5:2 diet has been shown to be as effective as traditional diets with their daily restriction of calories. Some people have a very negative reaction to the idea of fasting with, “I’d starve doing that!” being a common reaction. Below is a sample of what a 600 calorie day could look like based on values obtained on myfitnesspal.com: 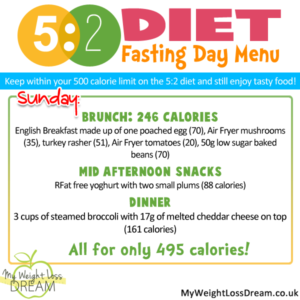 Another 5:2 Diet Example, courtesy MyWeightLoss Dream. Note that this type of menu could prevent ketone production.

The above totals to 668 calories, so a little over the study amount, but study participants were not exercising rigorously. For hard training athletes, bodybuilders and gym rats the low-calorie day’s limits may be able to be adjusted to individual needs. The above is also over five pounds of actual food weight, so hardly starving by most standards.

The other approach is to combine it with a single bacon, eggs, and butter ketogenic-friendly day, which could satiate a bit more given the high amounts of fat. This could also lead to the generation of ketone bodies by the end of the day, potentially yielding additional therapeutic and anti-inflammatory benefits.

Is the 5:2 Diet the answer to the world’s growing waistline? After reaching one’s target weight can the two “fast” days increase in calories in order to simply maintain one’s new weight? Can the 5:2 approach be combined with other diets such as the Very Low Carbohydrate Ketogenic Diet, The Mediterranean diet, The Paleo Diet, or the 40:30:30 diet in order to further enhance results? Can athletes use the two low-calorie days combined with anti-catabolic supplements and increased cardio in an attempt to spare muscle while stripping maximum fat?

The answer to all is…. well…. maybe. As with most research, we gain new insight and end up having new questions. Remember, this was a pilot study.

Can you stick with it? 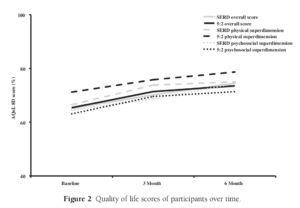 The researchers also kept Quality of Life scores, and over time, a regular diet surpassed 5:2. The solution could be cycling fasting strategies over time.

At this time we can say for sure that the 5:2 Diet is worth a shot if all else has failed you, since the results are on par with traditional dieting strategies. If eating as much as you want five days a week sounds great, and you can control yourself the other two, then it may work. Once again, we’re back to the point of “do what you can stick with long-term”.

Negating some of the positives of fasting

One piece of criticism here is that a 5:2 diet done with a lot of carbohydrates on the fasting day would likely remove any possibility of ketone body generation on the fasting days. For those who believe ketones to be therapeutic and beneficial (as we do), this is a drawback compared to other forms of fasting, where blood sugar levels are eventually dropped to the point of fat burn / ketone production. A 5:2 dieter may never get to that point.

Anyone considering the 5:2 diet, or any diet for that matter, should consult with their doctor prior to beginning. Those who struggle with obtaining a healthy weight should attempt to find an eating strategy that they can employ, to some degree, for the rest of their lives. No one becomes morbidly obese in three months and thus no one should expect a three-month change to solve a problem for life.

We will continue to monitor research on the 5:2 Diet and any research that may benefit our readers on all things health and fitness.