Dave comes to PricePlow as a diamond in the rough. He is a decorated, 27-year United States Navy combat veteran and government security contractor trained in every facet of security, both cyber and physical. He has performed many jobs over the last quarter century and worn many hats, but the most important job he has is father. He considers himself a gym rat, a clanger and banger -- ie. a weightlifter. He has experience with many different types of supplements and brands.

Dave brings a background in competitive sports, cybersecurity expertise, as well as knowledge gained through more than a decade of warzone experience.

Dave comes from a background filled with nearly every sport one could fit into a childhood. He started playing soccer when he was in kindergarten while his father was stationed at Fort Still, Oklahoma. When his family moved to Winona, Minnesota Dave began playing hockey, and when the weather turned warmer, he played soccer and baseball. After his father’s retirement, they moved to Springfield, Illinois where he continued to play hockey, soccer, and baseball.

When Dave began high school, he played soccer his freshman year and then decided to move to football where he was the starting quarterback for the junior varsity squad and became the first JV quarterback to lead his team to the JV tournament championship. Unfortunately, a neck injury ended his football career and led him to become a competitive swimmer. As a swimmer, Dave set multiple school records in the backstroke, medley relay and free relay. As of February 2021, Dave is 5’10 and weighs in at 219lbs.

At home, Dave is married to his better half, Lindsay, and together they are raising their two miracle daughters, Phoebe and Emme. Lindsay homeschools Phoebe and will do the same with Emme when she come of age. 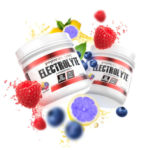 Primeval Labs Electrolyte is a simple, great tasting electrolyte formula that will give a boost prior to, during, and after training. Each serving (2.6 grams) provides a quality dose of essential electrolytes, which includes calcium, phosphorus, magnesium, sodium, and potassium.[…] 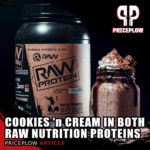 Posted on April 8, 2021 by Dave Taylor and Mike Roberto in Supplement News | No Comments 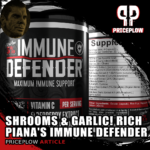 From the brand started by Rich Piana, Immune Defender will help supercharge your immune system so you can stay healthy and in the game. It’s not all about getting ready to “KILL IT” before your pre workout and […]

Posted on March 31, 2021 by Dave Taylor and Mike Roberto in Supplement News | No Comments